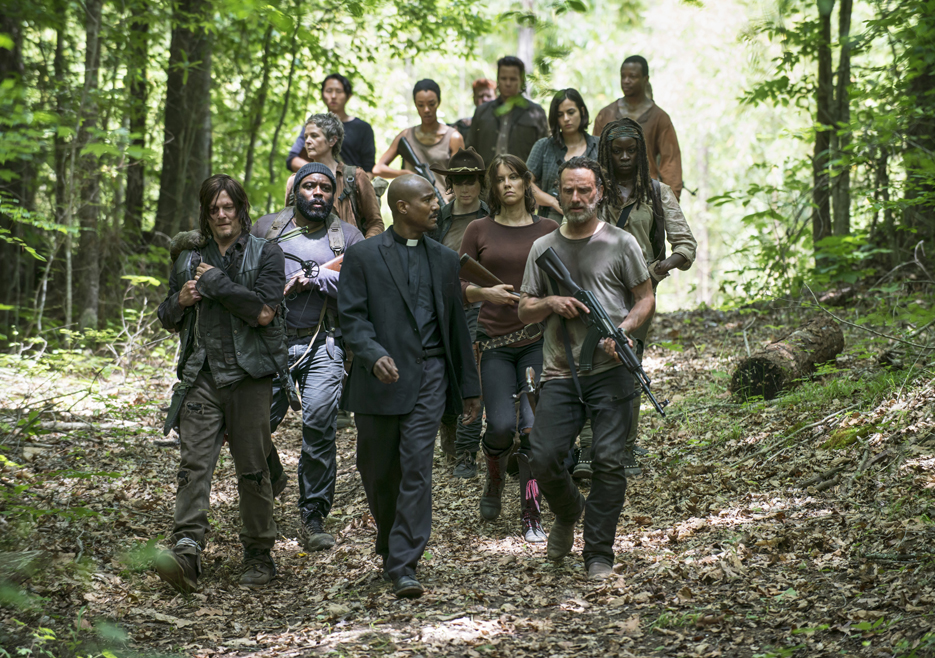 A new Walking Dead episode hit the airwaves last night but it didn’t bring us the answer we are all waiting for: is Glenn really dead? We can say his name without spoiling the show too much for you, given that Glenn has been absent from the series for a couple of episodes now and has effectively become the “Jon Snow” character of the highly acclaimed zombie drama.

But episode six was filled with action, including the mysterious appearance of a gang of organized survivors and a desperate cry for help. So stay away if you don’t want any spoilers.

Let’s start with the end of episode six, shall we? Daryl, Abraham and Sasha are returning home in a fuel truck after fighting for their lives against humans – that’s right, humans are still the most dangerous element in this world – and that’s when they hear someone asking for help over the radio while trying to contact Rick. That’s the biggest mystery of the episode: who is asking for help? We have no idea, but Glenn is one obvious answer that comes to mind.

Would Glenn make any noises over the radio with hordes of zombies around him? Well, this particular conversation takes place at least a day after the events shown in previous episodes so Glenn might be trapped somewhere but still alive.

But let’s back up a bit: Daryl, Abraham, and Sasha were tasked with leading away the herd of walkers in Rick’s daring-but-somewhat-failed plan to send the zombie pack away from Alexandria. Things went south quickly in the previous episodes, as Alexandria was attacked by the Wolves, who made quite a ruckus and diverted some walkers toward the safe neighborhood Rick was trying to protect.

However, a large number of zombies still follow Daryl, Abraham, and Sasha in episode six. Making matters worse, the group encounters a group of hostile humans who begin shooting at them for unknown reasons. Daryl, who’s on his bike, manages to escape the attackers following him although he also sustains some injury to his left hand. That’s how he meets three other survivors who manage to capture him and tie him down.

Abraham and Sasha, meanwhile, kill the crew in the car chasing them and then start looking for shelter while leaving clues for the skilled tracker – Sasha insists on hiding and waiting for Daryl to find them rather than leave for home.

Much of the action of episode six centers on Daryl and his three captors, a man and two young women, one of which is a diabetic.

The woods just aren’t a safe place for anyone, as more intruders equipped with guns appear, apparently chasing these new non-essential characters. Who are these people? What are their intentions? We’re not introduced to the new attackers, but they are highly organized and have a central leader who’s very interested in capturing our protagonists. Too bad we only get to see silhouettes through the leaves and only hear shouted conversations and car engines. But something tells me the Alexandria group will somehow run into them again into future episodes.

Daryl escapes his brief captivity but accidentally flees with the insulin the diabetic woman needs. He decides to return to her with the medicine to help his former captors survive.  This wouldn’t be a Walking Dead episode without someone being killed by a zombie, however, and after getting her insulin shot, the diabetic girl falls prey to two burned out walkers, former friends who were apparently killed in a fire. Soon after that, Daryl is robbed (again) by the remaining two characters, who take his bike and bow and speed off, but not before hearing his offer and seemingly accepting to join the Alexandria crew.

As this happens, Abraham and Sasha have serious chats about their current and previous issues, and how they’ve coped with losses. Sasha is the voice of reason, trying to stop Abraham’s reckless behavior and his need to kill every single walker in sight, including the ones that don’t pose any threat.

Towards the end of the episode, Abraham and Sasha share a moment of romantic honesty that suggests a beginning of something special – it looks like Abraham is asking Sasha out, without even thinking about Rosita.

That’s how the three peers ultimately end up in the same fuel truck where the cry for help is heard over the radio, as the car fades in the distance on its way to Alexandria.

The next episode will be all about the people in Alexandria, so we might still have to wait a while for Glenn’s full story to be told.