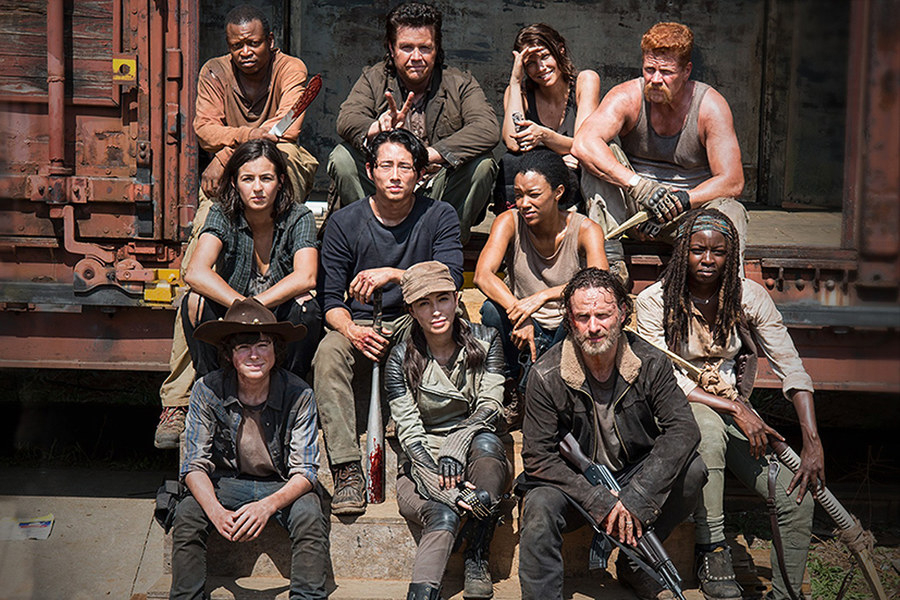 Episode five from AMC’s popular hit The Walking Dead aired last night, showing what’s in store next for the scared people of Alexandria in the aftermath of the recent attack. The fight for survival continues as the little community struggles to adapt to the new way of life, and that one burning question from episode three is still unanswered – but here’s your last chance to avoid any spoilers.

Before you ask, episode five doesn’t explain what happened to Glenn. We have no answer for his Jon Snow-like moment. The episode starts with Michonne describing what happened with the others as Deanna contemplates the approaching horde. Rick also makes his daring return, running amid walkers that are almost at the gate.

Tere’s little action in this episode, as everyone seems to be in need of a breather following the Wolves attack on the town. Alexandria residents, unfamiliar with what happens outside of the walls, have come to realize the cold hard truth: The walkers will be a persistent threat, and not all humans are peaceful. While many people of the Alexandria community start losing hope, some of the new characters realize they have to adapt to survive, even if that means doing things they wouldn’t have previously thought themselves capable.

Deanna, though temporarily crippled by the recent events and her personal losses, puts a plan on paper for the community’s future. She even tells Rick that she wants to live after facing her first zombie inside the gates at night, which she put down with Rick’s help.

Jessie kills a walker herself, an old housewife she used to be friendly with who was killed by the Wolves and turned into a zombie inside her house. All this happens in broad daylight, with other Alexandria residents watching. But Jessie doesn’t hesitate, putting a knife through her former friend’s head. “I used to not wanna see the way things are,” she tells everyone after the incident, seemingly repeating what Rick’s been saying all along. “It’s not that I couldn’t. It’s that I didn’t want to. But this is what life looks like now. We have to see it; we have to fight it. If we don’t fight, we die.”

Later during the episode, Rick and Jessie share their first kiss, though this relationship seems to already be doomed. Speaking of kisses, the town’s inexperienced new doctor, Denise, has a breakthrough for a patient and later kisses Tara, who had been encouraging her over the last few episodes.

His apparent death scene is shown at the beginning, but Glenn is nowhere to be seen during the rest of episode 605. His wife Maggie gathers equipment to search for him, but only after writing his name on Alexandria’s memorial wall that lists the names of victims. Aaron spots her just in time and decides to help her in her dangerous quest, leading her out of the neighborhood via a sewer system. That’s where they encounter a couple of underwater zombies that probably compete for the best walkers we’ve seen all season.

Maggie then tells Aaron that she’s pregnant with Glenn’s child, and ultimately decides to return to Alexandria rather than exit the sewer and face a horde of attacking roamers.

Maggie proceeds to erase Glenn’s name from the city’s memorial wall, suggesting she’s not ready to give up hope – so we shouldn’t either. Glenn might be back in the coming episodes, especially since Maggie confirmed she’s pregnant. In the comic books, Glenn’s death comes at the hands of a human after Maggie gets pregnant, so there’s hope Glenn will somehow survive.

Not all Alexandria residents will make it, though, and Deanna’s son might be the next to die. After saving the town in a previous episode by stopping the Wolves’ speeding truck that was threatening the integrity of the walls, Spencer stops other residents from looting the pantry, with Deanna overhearing his speech.

However, it’s Spencer who ends up stealing food, telling his mother in a drunken tantrum that it was her fault the small city is defenseless. At the end of the episode, Deanna appears to be walking at night by the watch post where Spencer had just replaced Rosita. After she passes the wall, blood is seen dripping from up above where her son should be. Did Spencer hurt himself while on duty? Will he be the next to die?

We’ll find out more details about all the Alexandria residents in the coming episodes, though chapter six will focus on Daryl, Sasha and Abraham, who are still leading a massive horde of walkers away from the town.