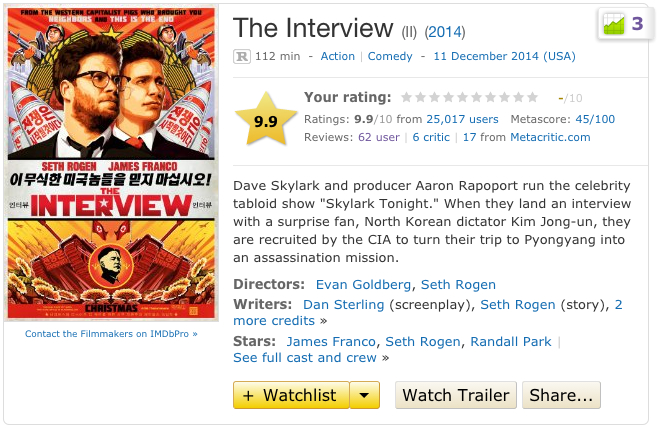 Hackers have attacked Sony Pictures in late November, crippling the movie studio’s internal network, stealing a huge amount of data and ultimately convincing the company to pull the controversial The Interview movie from cinemas a few days before it was supposed to be released. Since then, Sony changed its mind, saying the movie will be available to viewers at some point. And movie fans who’d like to fight back now have an interesting, out-of-the-box way to do it.

FROM EARLIER: Sony might end up releasing ‘The Interview’ after all – for free

No, you don’t have to start figuring out ways to discover the hackers’ identities or hack them back. Instead, you can do something entirely different to promote freedom of speech, as some Internet users have already done.

Even though the movie has not come out yet, anyone going to popular movie resource IMDb will find that more than 25,000 users have given The Interview an average rating of 9.9 stars out of 10 possible (as seen in the screenshot above), with many of them also leaving positive reviews that do not the defend the movie — likely not the next Oscar winner — but rather protest against hackers targeting Sony for this particular creation.

“I am giving this film a 10-star rating, purely because of the anger it has caused Mr. Un and all his little generals in North Korea. Well done to Kim for making this film bigger then it probably deserves to be!!!” one user wrote.

“Just like 14,000 others on here, I rated The Interview 10 out of 10 without even seeing it. I’m hearing from critics that have seen it, that its pretty bad. But this isn’t about the movie itself,” a different IMDb user said. “I’m rating this film a 10 out of 10 just to say ‘F*ck you’ to Kim Jung Un. Jung Un is a psychotic, ruthless dictator who thinks that he can rule everything and everyone. He sad he didn’t want The Interview release, and in a way he succeeded with Sony opting out of releasing this film. But I’ll still rate it 10 out of 10.”