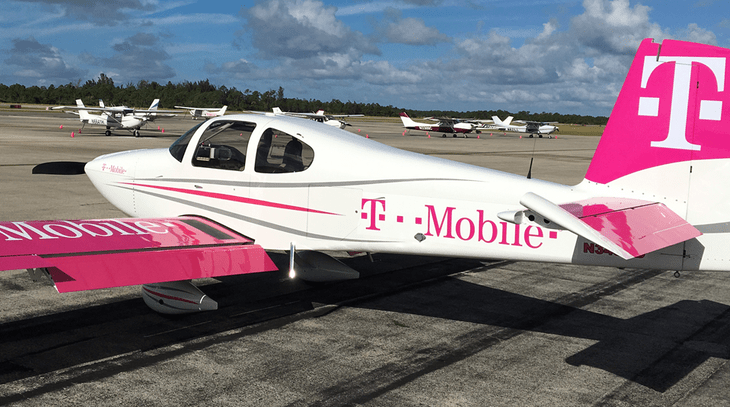 Verizon has millions of loyal subscribers who love its network but are nonetheless not pleased with its policy of charging you extra money if you go over your allotted monthly data limit. T-Mobile, which never misses an opportunity to troll rivals, sent out a plane to skywrite this particular grievance over Verizon’s headquarters on Monday, although Verizon had some first-rate comebacks of its own.

Here is part of the message that T-Mobile wrote over Verizon’s headquarters:

The other guys won't budge on overages. Welp, they need a new view. @Verizon, have ya looked outside? pic.twitter.com/Gra3R6DKz0

It’s tough to make out but T-Mobile says the message involves asking Verizon to scrap its overage fees:

Of course, Verizon spokesman Jeffery Nelson was prepared with some witty comebacks of his own. Among other things, he said that T-Mobile had to resort to such tactics because smoke signals were more reliable than its own network:

That time you found yet another form of communicating more reliable than the TMobile network. #SmokeSignals #Skywriting #PonyExpress

And he joked that Legere would probably have to use Verizon’s network to send out a tweet of the plane’s handiwork since there is supposedly no T-Mobile coverage around Verizon’s headquarters:

.@JohnLegere you probably need to use the Verizon network if you want to send a pic of your artwork. #NoTMoSignalHere(Either)

Either way, this was yet another entertaining trolling job by T-Mobile and regardless of the “Un-carrier’s” own issues with network coverage, we find its campaign to abolish mobile data overage fees to be very worthwhile.

UPDATE: Legere has now posted a clearer picture that shows the plane wrote the #AbolishOverages hashtag directly over Verizon’s HQ: