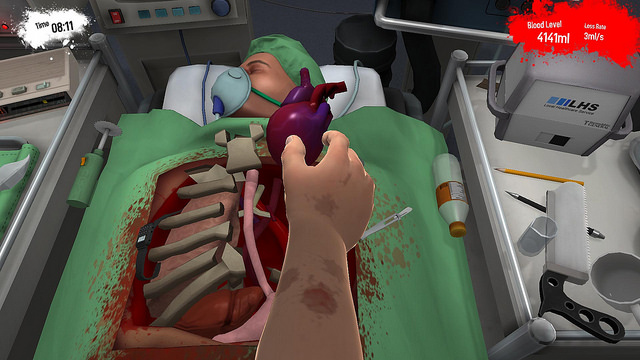 Gamers are pretty desensitized to blood and guts — after all, you can only blow off so many zombie heads or impale so many bandits before you just aren’t squeamish anymore. However, it’s one thing to have blood and random goo splatter everywhere, but it’s quite another to see actual organs taken out of people’s bodies and examined up close. Enter Surgeon Simulator, the game that lets you tear open a very unlucky patient and completely obliterate his vital organs with drills, hammers and other implements of destruction.

Surgeon Simulator has been around for a while now as a PC game and an iOS app but now it’s coming to your living room TV with a new port for the PlayStation 4. On the official PlayStation blog, developer Bossa Studios explains the challenges that the company faced in bringing its controls for the game over to the PS4‘s DualShock4 controllers.

“The first and most obvious step to take was to map hand movement and hand rotation to the left and right thumb sticks, as this is what players tend to expect on a console game,” the studio explains. “The finger controls were less obvious. We had a lot of ideas which turned out to be a bit too clumsy even for Surgeon Simulator. In the end we decided to lose the one-button-per-finger design used on the PC and instead condense it down into just two of the shoulder buttons.”

A video showing off the awesomely revolting botched surgeries you can do with this game follows below.