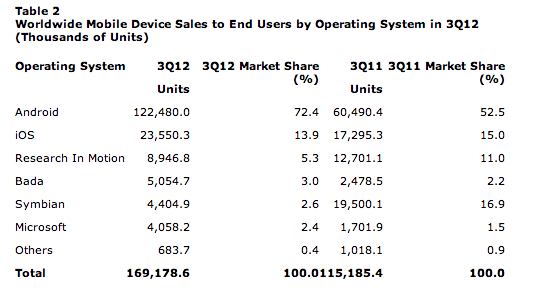 Research firm Gartner on Wednesday released its latest mobile estimates and found that sales of smartphones continued to grow in the third quarter of 2012. Worldwide sales saw a year-over-year increase of 46.9% from 115 million in 2011 to 169 million, accounting for 39.6% of all mobile phone sales. Android continues to lead the way and recorded an explosive quarter with sales of 122.4 million units for a 72.4% share of the market, compared to 23.5 million iPhones sold by Apple (AAPL) for a 13.9% market share. Samsung (005930) and Apple continue to lead all other smartphone vendors and controlled nearly 50% of the market, leaving “a handful of vendors fighting over a distant third spot.”

As more users migrate to advanced devices, a gap is being left in the sales of traditional mobile phones. Worldwide sales of mobile phones declined 3.1% year-over-year from 441 million in the third quarter of 2011 to 427 million in 2012. Gartner analysts have said, however, that there were positive signs for the industry.

“After two consecutive quarter of decline in mobile phone sales, demand has improved in both mature and emerging markets as sales increased sequentially,” said Anshul Gupta, principal research analyst at Gartner. “In China, sales of mobile phones grew driven by sales of smartphones, while demand of feature phones remained weak. In mature markets, we finally saw replacement sales pick up with the launch of new devices in the quarter.”

Samsung’s mobile sales crown remained in place in Q3, the South Korean manufacturer sold 97.9 million units for a 22.9% market share, ahead of Nokia’s (NOK) 82.3 million units and 19.2% market share. Evidence in the industry’s shift can be seen in Samsung’s sales, more than half, 55 million units, of which were smartphones.