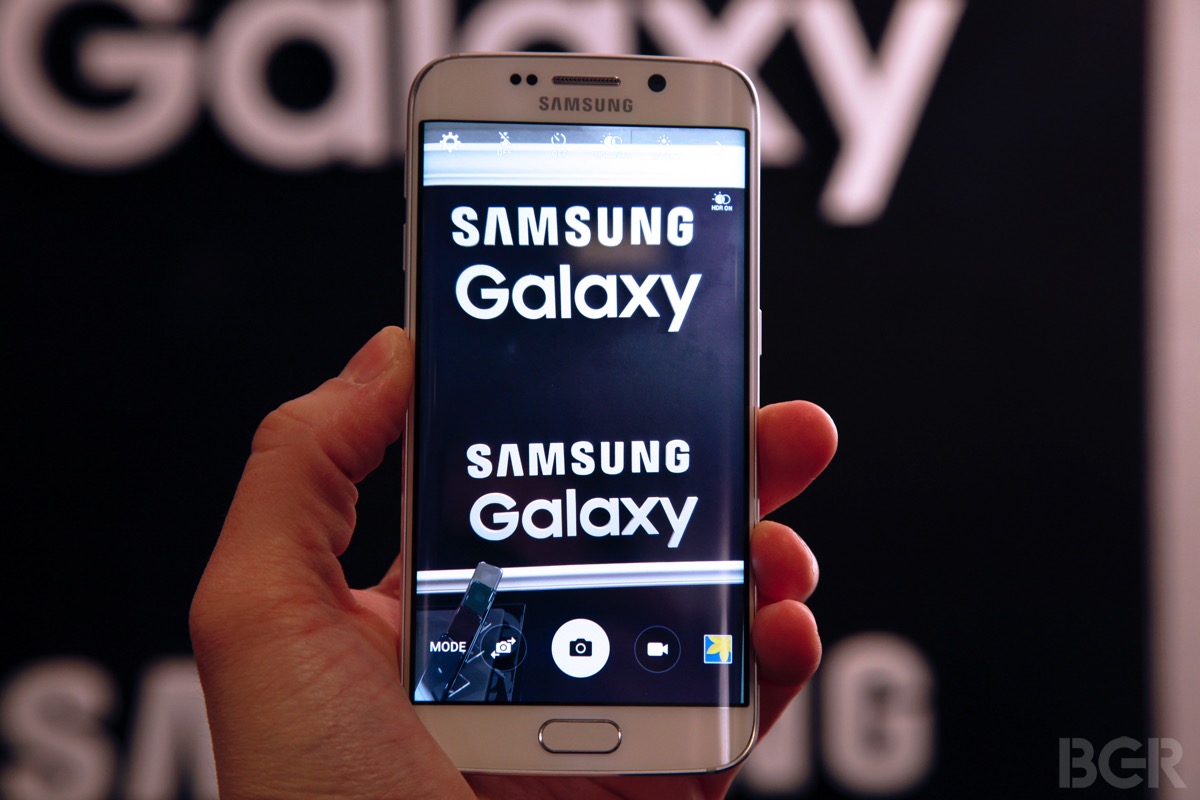 Samsung just unveiled its two next-generation flagship smartphones, the Galaxy S6 and Galaxy S6 edge, and tech fans will spend most of the day reading the same thing over and over again: These are the best Samsung phones ever — nay, the best Android phones ever.

They are both truly fantastic smartphones.

Leading up to today’s unveiling, Samsung caught a lot of flack for building more phones that bear a striking resemblance to other phones we know quite well: Apple’s iPhone 5 and iPhone 6. Having handled both the Galaxy S6 and the Galaxy S6 edge, I can tell you that there are definitely some “similarities,” but it’s not quite as bad as what you might have read.

At the right angle, it’s fairly clear that Samsung’s new phones took design elements from Apple’s iPhones. There are also plenty of original design elements to enjoy on these handsets, though.

In fact, the edge model in particular is a sight to behold. There are no two ways about it: Samsung’s Galaxy S6 edge design is absolutely stunning.

HTC has been known as the Android vendor with the best design chops for quite some time now, but that streak comes to an end in 2015. HTC picked a terrible year to introduce an incremental update to the HTC One M8; though the One M9 is indeed a beautiful device, Samsung’s flagship phones this year were redesigned from the ground up, and they’re far more exciting as a result.

Of the two phones Samsung unveiled on Sunday, the Galaxy S6 edge is by far my favorite. Its specs are nearly identical to the standard Galaxy S6, but the look and feel of the phone are dramatically enhanced by the device’s two curved sides.

On the flip side, I expect the Galaxy S6 edge to be more expensive than the standard Galaxy S6 and much harder to come by, though Samsung hasn’t announced any pricing or firm launch details beyond “sometime in April.”

The Galaxy S6 edge’s curved display contours perfectly to the hand. In fact, your thumb can reach further across the phone’s 5.1-inch display as a result of the curves.

And speaking of the display, the quad HD Super AMOLED screen on the Galaxy S6 edge is positively gorgeous. It’s exactly what we have come to expect from a Samsung display. The pixel density comes in at a shocking 577 ppi, and I’m not sure we’ll see a better screen on a smartphone all year.

At least, not until the Galaxy Note 5 debuts this fall.

Focusing specifically on the curved areas of the display, these are not like the “Edge panel” on the Galaxy Note Edge.

Remember when I said the Edge panel was a bad idea that Samsung took way too far instead of killing during the development process? Well, it looks like Samsung may have agreed, because the curved sides of the Galaxy S6 edge screen are not separate screens. Instead, they are continuations of the main display resting under more subtle slopes.

The curved sides of the screen still provide a few additional functions that the standard S6’s display doesn’t support, but the separate pane we see on the Note Edge is gone. You can still use the sides as a night clock and they still support that embarrassingly awkward rub-to-wake gesture, but the rest of the features from the Note Edge are gone.

There is one cool new function to speak of, though. Sliding your finger inward from the edge of the screen on a specific point opens an overlay with your favorite contacts. Each of those contacts is also assigned a unique color, and when one of those contacts calls you while your phone is face down, the curved sides of the screen will glow with that contact’s color.

In a meeting last week, a Samsung hardware designer said his team was “given the freedom to design our dream product.” We having a feeling the Galaxy S6 edge will be a dream product for plenty of smartphone fans outside the company as well.

The hardware isn’t the only area where Samsung rethought its entire strategy, though.

The new version of TouchWiz on the Galaxy S6 edge is a stark departure from last year’s version. Android Lollipop shines through much more clearly on the Galaxy S6 and S6 edge than Android has on earlier phones, and Samsung said it reduced the number of features by 40% in its latest software.

As a result, the user experience is much cleaner and more enjoyable on the Galaxy S6 edge than it has been in the past.

We’ll dive much deeper into the software in our review, but rest assured that most of the bloat is gone and has been replaced by a few key apps from Microsoft. The phone ships with free cloud storage courtesy of OneDrive, for example, and OneNote and Skype are both preinstalled as well.

If there’s an old Samsung app that you used but that doesn’t ship preinstalled on the phone, you’ll be able to download it through Samsung’s app portal.

Of the two Galaxy S6 models Samsung unveiled on Sunday, the Galaxy S6 edge is by far my preference. It really is a beautiful phone with a stunning design, blazing fast performance, and fit and finish that are a cut above any other Android phone on the market.

This is the Galaxy phone we’ve been waiting for.

The Galaxy S6 edge will launch in April in the U.S., and it will be available from Verizon Wireless, AT&T, T-Mobile, Sprint and U.S. Cellular, as well as from popular retailers such as Best Buy and Amazon.

Be sure to check out our Galaxy S6 hands-on for more details and visit this post for additional information.