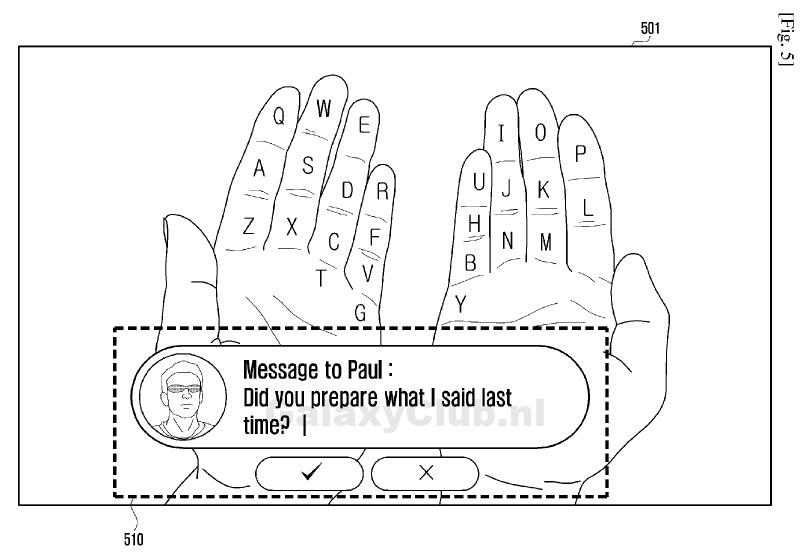 We’ve known for a while now that Samsung has been working on its own wearable computer headset that will be similar in a lot of ways to Google Glass. However one thing we’ve wondered is how Samsung plans to differentiate its own digital headset from Google’s, and now thanks to a patent filing uncovered by Galaxy Club, we might have a better idea.

It seems that Samsung has been toying around with the idea of using its headset to impose an augmented reality keyboard onto users’ hands that will supposedly help them more easily write out messages. A concept drawing in the patent filing shows that Samsung has figured out a way to line up all 26 letters of the alphabet onto two human hands while leaving thumbs free to type away at the augmented reality keyboard.

While this is a very cool concept, it’s also one that seems wildly impractical. People wearing Glass already draw lots of attention to themselves and they’d only draw even more if they walked around holding their hands up to their faces and pecking away at virtual keyboards that only they can see. Also, in an age where voice commands have become so prevalent, we really have to wonder why someone would forsake them in favor of an augmented reality keyboard.

In its patent filing, Samsung says that voice commands face limitations due to “low recognition accuracy and noisy environment vulnerability” while also pointing out that voice commands make your messages vulnerable to eavesdroppers. Nonetheless, the chances that Samsung’s augmented reality keyboard will catch on as an alternative seem pretty slim, especially when you consider how awkward it would be to type with your thumbs while trying to hold your hands in one set position to make sure the keys stay in their projected areas.