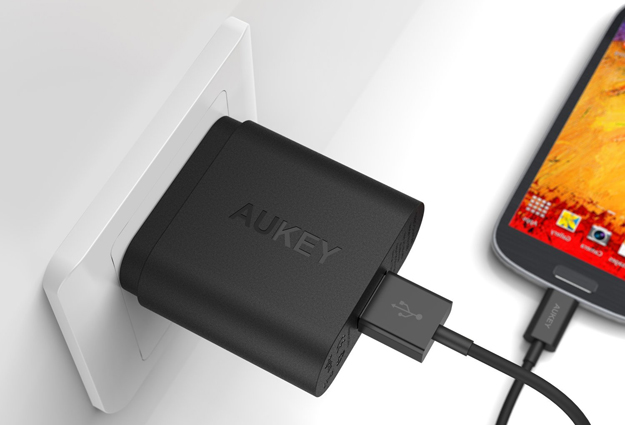 Last week, we told you about a great deal happening on Amazon. For just $11, users were able to purchase a special charger that uses Quick Charge 2.0 technology to charge their compatible smartphones and tablets up to 75% faster than some stock wall chargers. This was apparently a pretty appealing prospect for BGR readers, because they flooded the site and the charger was sold out a short while later.

Well if you missed out on that deal, don’t despair: The $11 quick charger deal is back on at Amazon — at least, while supplies last.

The Aukey Quick Charge 2.0 18W USB turbo charger will work with any and all Android phones and tablets. Simply connect your stock USB cable to the adapter and you’re good to go. Some devices ship with Quick Charge 2.0 compatibility though, and for those devices, you may find that your phone or tablet recharges faster than ever before.

Why, you might be wondering? It’s simple: Quick Charge 2.0 is nifty Qualcomm technology that helps your battery soak up electricity faster than standard charging tech, but you need a compatible phone and a compatible charger to take advantage of it. Some compatible phones like the HTC One M9 ship without a Quick Charge 2.0 wall adapter, so you’ll need a third-party charger like Aukey’s if you want to recharge your phone as quickly as possible.

Here’s a list of some of the smartphones that are compatible with Quick Charge 2.0 tech:

This nifty Aukey charger is a solid deal at $15.99, but enter the coupon code LUMB8LHS at checkout and you’ll get an addition $5 off, bringing the final price to just under $11.