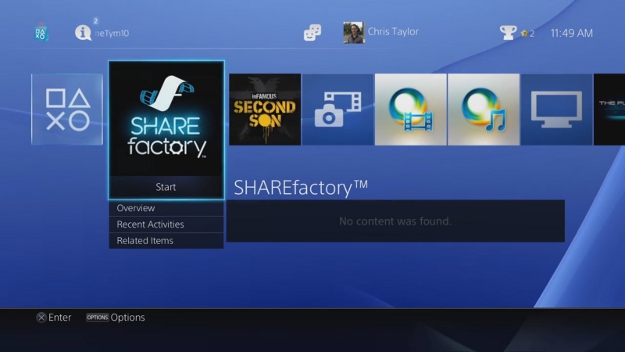 Sony detailed the first major update for the PlayStation 4 on Wednesday, introducing the SHAREfactory video editor and the ability to pre-download games that haven’t hit the PlayStation Store yet. Despite its unending success in the marketplace, the PlayStation 4 has fallen behind the Xbox One recently in terms of additional features. Microsoft began patching Xbox One almost immediately after launch, adding an enhanced Twitch application, improving the party system and updating the UI.

One of the more compelling features of the Xbox One is the Upload Studio app, which allows players to record, edit and share their gameplay footage with others. PlayStation 4 owners can record footage as well, but there is no way to edit the footage from the console itself. SHAREfactory is Sony’s answer to Upload Studio.

“With SHAREfactory, you can now easily combine your captured video clips for editing, personalize them with special effects using filters, transitions, and themes, as well as share them with your friends and social networks. SHAREfactory also allows you to personalize your videos by adding text, stickers, and a set of included audio tracks, as well as video commentary with picture-in-picture capability with PlayStation Camera. It also allows you to import your original music to add to the custom soundtrack for your video.”

Sony will let players export their videos to external USB storage devices as well, a first for the PlayStation 4. As previously announced, PS4 owners will also be able to record gameplay using third-party video capture tools, as HDCP can be switching off after version 1.70 drops.

Another addition to the PlayStation 4 will excite impatient gamers most of all: pre-downloading. With the 1.70 update, anyone who preorders a game on the PlayStation Store will be able to begin downloading the game days in advance of its retail release. That means the moment the game unlocks, it’ll be playable.

The software update doesn’t have a release date yet, but Sony says it’s “coming soon.” Check out SHAREfactory in action below.