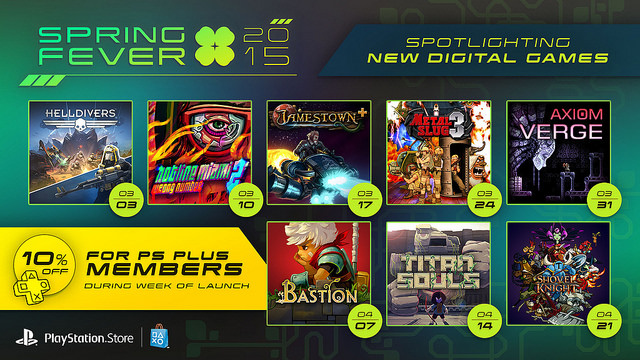 At the dawn of a new console generation, there are inevitably going to be long stretches without many major game releases. Although The Order: 1886 just came out and Bloodborne and Battlefield Hardline are coming soon, you probably won’t have to quit your job to stay caught up.

At least, that was the case until Sony announced its Spring Fever 2015 sale for PlayStation 4, PlayStation 3 and PS Vita.

For the past few years, Sony has partnered with indie developers in order to bring brand new games to the PlayStation consoles week after week for an entire month during the spring. This year, the releases are going to keep dropping all the way through the middle of April.

Here’s a complete list of indie game releases (and the consoles they’ll release on) from March 3rd – April 21st:

As an added bonus, PlayStation Plus members will get an additional 10% off all 8 games during their respective release weeks. So, for example, if you pick up Helldivers before March 9th, it’ll only cost you $17.99. Check out the full list of prices at the PlayStation Blog.

There are a few games on this list that I can’t wait to play, but rather than ramble on about them, I’ll just tell you to watch this video for a quick overview of each: