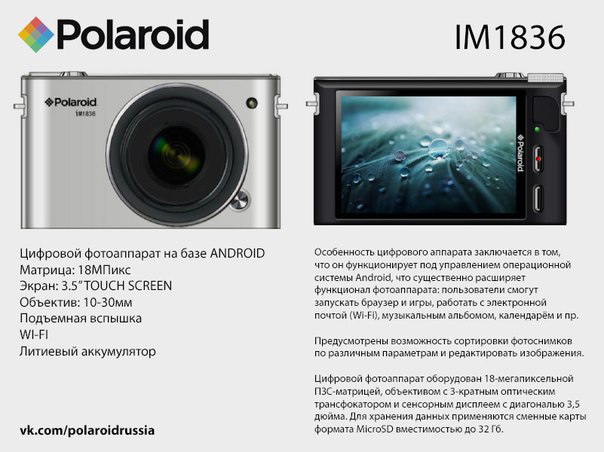 Samsung’s (005930) Galaxy Camera and Nikon’s (NINOY) Coolpix S800c are just the beginning of a swath of Android-powered cameras. Newly leaked images and specs point to Polaroid reviving its camera business with what could be the world’s first Android camera with interchangeable lenses. With no official name yet, the tentatively named IM1836 camera will reportedly feature a 18.1-megapixel sensor, 3.5-inch touchscreen, pop-up flash, Wi-Fi, HDMI and Android 4.0.

The Galaxy Camera and Coolpix S800c do a fine job taking pictures that are considerably better than what you get from a smartphone, but they still can’t match a mirrorless camera with a good lens. At first glance, Polaroid’s camera looks to be a rebadged Nikon 1 J2, but the resemblance only runs skin deep, as PhotoRumors reports the camera only takes MicroSD cards.

Polaroid might not be a major player, but as more companies start incorporating Android into their cameras, there’s going to be a shift in the features consumers expect from them. In the next few years, novelty features such as Wi-Fi, cellular data and photo editing apps will be the norm and we’ll laugh at how we ever lived without them.