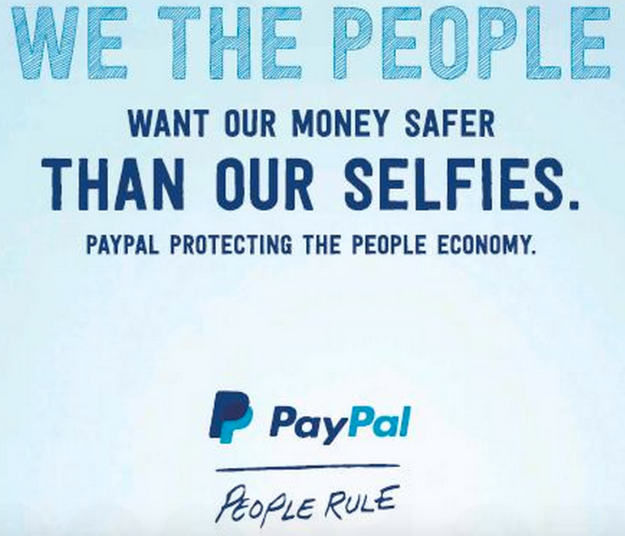 After Samsung’s relentless TV commercial hits at Apple following the iPhone 6 announcement, PayPal is next to poke the iPhone maker with an ad. Obviously, the popular payments company isn’t too happy it has to compete with Apple Pay henceforward, and PayPal decided to go the security route with an ad that appeared in the print edition of The New York Times, Pando Daily reports. Specifically, PayPal is using the recent iCloud-related Nudegate scandal to cast doubts over the security of Apple Pay, even though the two Apple products are not exactly connected.

FROM EARLIER: Apple Pay: Everything you need to know before your first wireless shopping spree

“We the people want our money safer than our selfies,” the ad says, adding that PayPal is “protecting the people economy.” A second message on the ad advises readers to “download the PayPal app now and securely buy almost anything with just one touch.”

A week before Apple’s iPhone 6 event, hackers have published online many nude images and videos for celebrities, after hacking their iCloud accounts. Apple was quick to respond that Apple’s iCloud system had not been hacked, and that other means was used to obtain the credentials required to access iPhone backups stored in the celebrities’ iCloud accounts. Tim Cook further vowed in an interview before the iPhone 6 event that iCloud security would be increased to prevent similar attempts in the future.

The hacks raised concerns on Apple’s upcoming iCloud-related features and rumored payment system. But even though Apple pretended the iCloud hacks didn’t happen during the iPhone 6 event, as it didn’t address the matter in any way during the keynote, the company explained how Apple Pay security works, revealing that card data is only stored locally on the device in the NFC secure element, and transactions are further protected by the Touch ID fingerprint sensor. Furthermore, Apple said that it doesn’t log transaction details in its cloud.

Thus, even though it didn’t address iCloud security concerns, it made sure future users understand Apple Pay is supposed to both be a secure and private payment option that’s hardly connected to their iTunes/iCloud accounts. Sure, assuming a hacker obtains iCloud credentials for a target, then he or she could use the account to make iTunes purchases but not Apple Pay transactions, and could also access Passbook backups (it’s not clear whether credit card data included in Passbook  will also be included in  back ups), but not Apple Pay transactions.

Apple Pay will be available at some point in October, via a future iOS 8 update, and will initially work only on iPhone 6 and iPhone 6 Plus in the U.S. At that point, users will be able to choose Apple Pay over PayPal when shopping online from their iPhone 6 models.

Meanwhile, it’s still not clear whether PayPal will use the Touch ID fingerprint sensor in iOS devices to secure its own transactions, although reports suggested that will be the obvious course of action for the company, given that it also offers a similar feature on the Galaxy models that have fingerprint scanners, including the Galaxy S5 and Galaxy Note 4.

The full PayPal ad follows below.