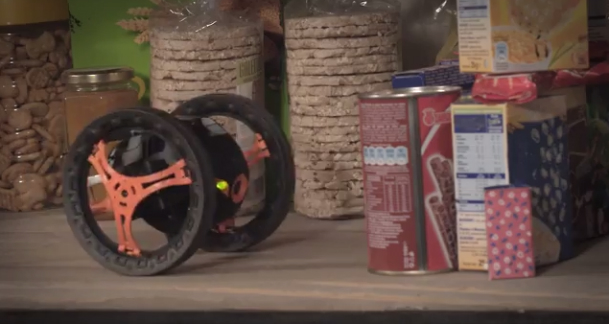 It wouldn’t be another CES without new Parrot toys, so the company unveiled two new robots that can be controlled using smartphones and tablets, including the Jumping Sumo and the MiniDrone, BBC reports. The Jumping Sumo can jump up to 80 centimeters in the air and can make sharp 90-degree turns, as each wheel is independently controlled. The device is managed via Wi-Fi and has a camera that can stream video back to the mobile device. As seen in the video, the Jumping Sumo also has an arm that can be used to grab stuff along the way. Unfortunately, the battery of this toy only lasts about 20 minutes between charges.

The MiniDrone is a smaller version of the popular Parrot AR Drones, but it will nonetheless fly around just like its bigger brethren. On top of its flying powers, the device also comes with a two-wheel structure that makes it look like it’s climbing walls, or rolling on the ceiling. The MiniDrone is also controlled via a smartphone app, but because it’s smaller in size, it can only offer eight minutes of flight at a time. The device connects to handsets and tablets via Bluetooth 4.0 LE, and packs a camera as well, but one that can’t stream video.

Pricing details aren’t available for either model at this time.