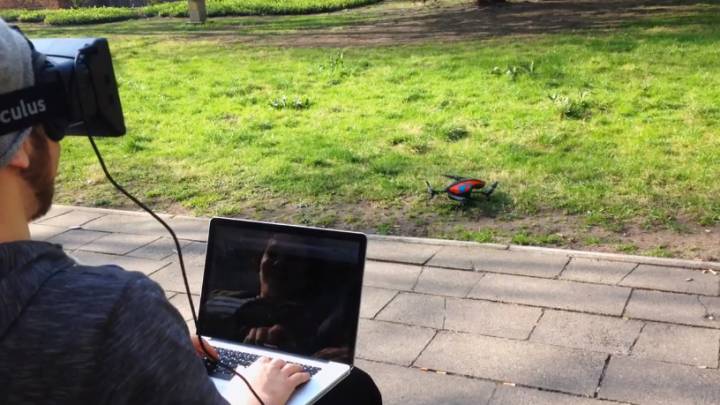 Berlin-based developer Diego Araos was able to connect an Oculus Rift headset to a Parrot AR drone and actually control it by simply moving his head. The whole thing was recorded and posted on YouTube, where interested users can check out the experience of flying a drone using the Oculus virtual reality gear. According to the developer, the whole project is “really fun,” and most importantly, the latency is “very low.” Parrot AR owners that want to try to fly a drone using Oculus Rift – assuming they have access to the headset – can get the source code needed to make it happen from GitHub, as Araos is sharing his project.

The developer said that this particular project is a fork of a different projects of his, which would allow him to control a drone-swarm, or “several AR drones within one network.”

Even though the Parrot AR drone flying with Oculus Rift is just a side project for a developer, Facebook’s recently announced plans revealed not only that the company is interested in virtual reality, but also confirmed its drone-related plans – however, the company is yet to mix them in any way. Facebook has recently purchased Oculus in a $2 billion deal, and in a different announcement the company said that it will rely on unmanned drones and lasers to deliver Internet connectivity to regions of the world in which other means of deploying Internet are more costly.

The video showing a demo of the Parrot AR / Oculus Rift project follows below.