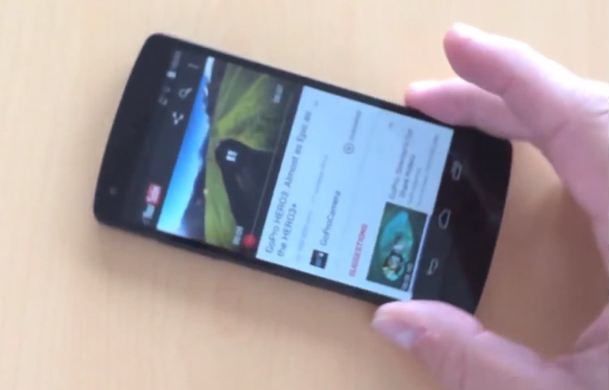 Google will reportedly launch its new Nexus 5 smartphone on Tuesday without an accompanying press conference, and at this point we can see why. We already know just about everything there is to know about the new pure Google phone, and almost every question mark left was likely just filled in by a fairly extensive early hands-on video walkthrough posted to YouTube by Enaze Uddin. The seven-minute video gives viewers a nice look at the hardware from every angle and then hops around through various apps to show us what’s in store from Google’s new Nexus 5.

According to a leaked service manual for the Nexus 5, Google’s upcoming new smartphone was designed by LG and will feature a 5-inch full HD display, a 2.3GHz Snapdragon 800 chipset, 2GB of RAM, an 8-megapixel rear camera with optical image stabilization, a 1.3-megapixel front-facing camera, a 2,300 mAh battery, NFC and Android 4.4 KitKat. It will also support wireless charging.

Beyond the phone’s specs, a recent rumor suggested the Nexus 5 might be had for just $299 off contract with 16GB of storage, which would easily make the new Nexus phone the most attractive Android smartphone on the planet. A 32GB version of the Nexus 5 supposedly priced at $399 will reportedly include a larger battery.

Of note, this hands-on video of the new Nexus 5 was apparently recorded quite some time ago as it carries an early build of Android 4.4 labeled “Key Lime Pie” instead of “KitKat.” It still exposes nearly all there is to know about the upcoming handset though, and the full video is embedded below.