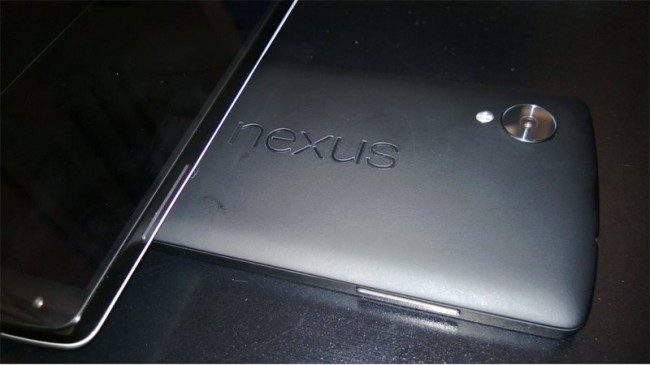 Google’s upcoming Nexus 5 smartphone has leaked several times already, but eager Android fans waiting for the company’s newest pure Google device to launch certainly won’t mind seeing the unannounced handset again. A MacRumors forum member on Monday evening posted a photo of an unannounced smartphone that clearly appears to be the Nexus 5. This is the clearest image we have seen to date of Google’s new Nexus phone, though no additional details regarding the device’s specs or a potential release date were provided.

The new photo follows a number of earlier leaks that showed the Nexus 5 in photos and even a pair of short videos. In fact, even Google has gotten in on the action and leaked the Nexus 5 itself. Google’s next-generation Nexus 5 is expected to launch toward the end of this month and rumored specs include a 5-inch display, a Snapdragon 800 processor, a 7-band LTE radio, an 8-megapixel or 13-megapixel rear camera, 2GB or 3GB of RAM, a 2,700 mAh battery and of course Android 4.4 KitKat.