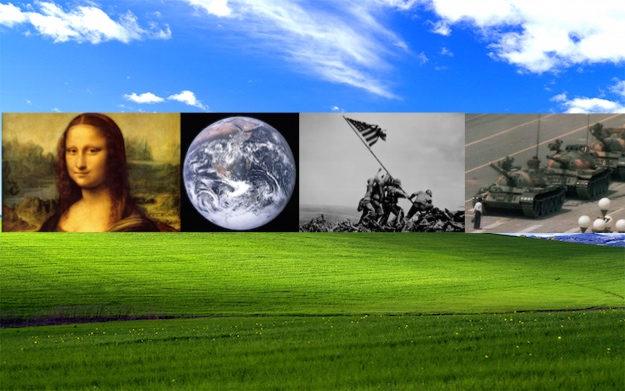 Thanks to the smartphone, the number of photographs taken every year has absolutely exploded in a short amount of time. Case in point, it’s been estimated that approximately 1/3 of all the photos ever taken over the last 188 years were taken during the last 2 or 3 years. In a world where it’s never been easier to take photos and share them with the world, it’s only natural to wonder: What is the most viewed photograph of all time?

DON’T MISS: These are the 10 most beautiful movies ever made

The answer to this question is actually quite interesting. While it’s tempting to assume that the title belongs to a well-known historical photo, such as, say, the Mona Lisa, the actual answer was likely sitting right before your eyes for a few years time.

While there’s no way to know the answer with 100% certainly, it’s a fairly good bet that the most viewed photograph of all time is a photo called “Bliss” taken by Charles O’Rear in 1996.

What’s that you say? You’ve never heard of a photo called “Bliss” before?

Well you’ve undoubtedly seen it, though  you might know it better as the default background that shipped with Windows XP.

Ah yes, Windows XP, the tried and true Microsoft OS that simply refused to die. Released all the way back in 2001, Microsoft officially supported the OS all the way up until 2014. Still, even as recently as March 2015, some estimates pegged XP’s share of the desktop market at a whopping 16.94%.

Even for non-Windows users, avoiding using a Windows machine entirely during the early to mid-2000s was all but an impossibility. For most people across the world, it was the photo they saw every day when they used a computer.

As for the story behind “Bliss”, it was taken by Charles O’Rear in Sonoma California in 1996 with a medium format Mamiya RZ67 camera. Believe it or not, the photo itself, which vibrantly depicts lush, rolling green hills and wispy white clouds, was not digitally altered when Microsoft picked it as the default background image in Windows XP..

While O’Rear naturally received a hefty sum for licensing the photo to Microsoft, a non-disclosure agreement prevents him from revealing the exact figure. Still, a 2011 profile on O’Rear in the Napa Valley Register notes that “he received one of the largest amounts ever paid to a living, working photographer.”

Given the ubiquity of Windows XP at the height of its popularity, not to mention the fact that it was the world’s most popular desktop OS for a good 6+ years, it’s a safe bet that Bliss has been viewed by well over 1 billion people.

In fact, when Microsoft announced in April of 2014 that they would no longer be supporting Windows XP, they put together an interesting video detailing the story behind “the wallpaper we’ll never forget.”

As a final point of interest, here’s a photo of the same exact location taken by Goldin+Senneby in November of 2006. It’s aptly titled After Microsoft.