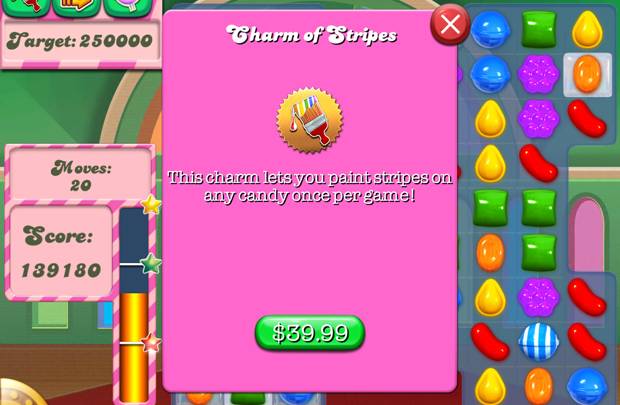 Do you play a lot of Candy Crush Saga or Clash of Clans but almost never spend any money on in-app purchases? If so then you’re free riding on the backs of a tiny number of users who are spending ungodly sums on virtual goods that enhance their enjoyment of their favorite games. Re/code reports that a new study from app-testing firm Swrve claims that half of all in-app purchases are made by just 0.15% of mobile gamers, which is pretty stunning considering how lucrative in-app purchases have become for mobile game developers.

How insane is this? Well let’s crunch some numbers on King, the company behind Candy Crush Saga that generated a stunning $1.88 billion in revenue last year. In the fourth quarter of 2013, King said its games averaged around 124 million users per day, which for the sake of convenience we’ll assume is King’s overall regular user base. Over that same quarter, King’s games generated $602 million in revenue, which means each user generated around $4.85 for the entire quarter. However, if we assume that half of that revenue was generated by 0.15% of all King players — around 186,000 total players — then we see that King generated a stunning average of $1,618.28 on the quarter from each of these users alone.

Sound too ridiculous to believe? Re/code writes that it spoke with a gaming executive who works with a Japanese game company that had “one player who spent about $10,000 per month on in-app purchases.” This one user was so important to the game’s revenue stream, the executive said, that the company “assigned an employee to cater just to that [user], to ensure that she was always satisfied with the game and therefore likely to keep coming back.”

All of this makes us wonder: How do people who are clearly this addicted to mobile games keep jobs that allow them to spend $10,000 a month on in-app purchases in the first place? The mind boggles.