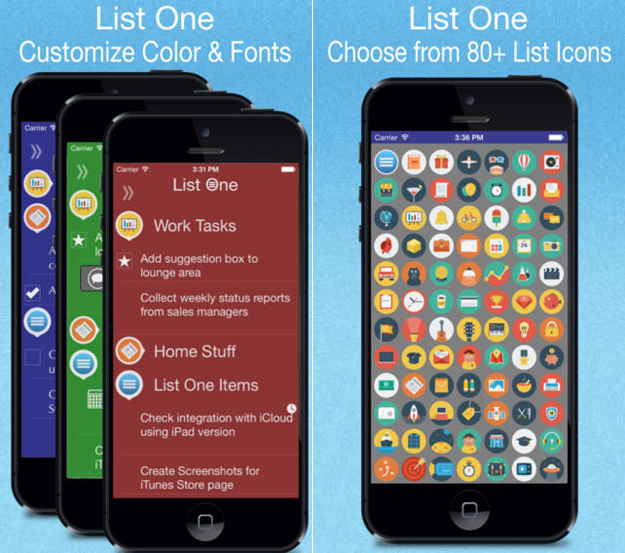 Apple CEO Tim Cook announced during his recent WWDC 2014 keynote presentation that his company’s App Store is now home to more than 1.2 million apps. By our estimation, approximately 1.19 million of them are list apps. Ok, perhaps the actual figure isn’t quite that high, but list apps need to offer users a unique feature set in order to separate themselves from the crowd.

Many apps look to do that by dumping in tons of features that might ultimately overwhelm the user and cause confusion. List One takes a different approach: It keeps functionality simple and straightforward, but allows users to customize the look and feel of their lists.

Instead of stuffing in dozens of different features, many of which might be found by a small subset of users, List One by Mobile Simplified keeps functionality simple. Create a list, save a list, sync a list. The app then lets you make it your own with nifty visual customizations such as unique fonts, different backgrounds and a series of icons to help you identify different categories or topics.

All your lists on one view. Customize, Share, Sync on iCloud.
* Supports the easy to use Flesky Keyboard

Features:
* Many Lists, One Screen, One View
* Expand and collapse any list
* Choose from over 80 icons for each list
* Simple intuitive controls
* Attach reminders for any list item
* Attach phone numbers to easily remember to call someone
* Attach addresses to easily find locations
* Sync your lists through iCloud
* Customize with 100+ fonts
* Customize with background colors

List One is a universal app designed for both the iPhone and iPad. It’s normally $1.99, but it’s free right now for a limited time.