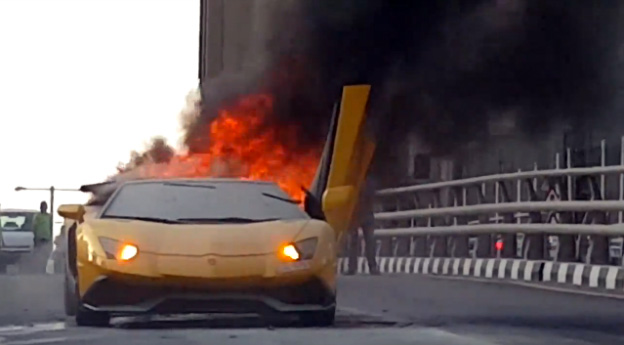 Believe it or not, people with expensive sports cars like to show off. Shocking, we know. Supercars have always been the tool of choice for wealthy people who like to flaunt their success, and there’s certainly nothing wrong with showing off if you want. At the same time, it’s always fun to point and laugh when over the top vanity backfires and things go awry.

We’ve seen plenty of videos where luxury sports cars have proven to be too much car for a particular driver, who ends up spinning out or even crashing a million-dollar supercar while trying to show off in a parking lot. Now, it’s time to enjoy a video of a Lamborghini bursting into flames as its driver revs his engine for a selfie being taken by the Ferrari driver in front of him.

That’s right, apparently no one told this guy that revving your engine doesn’t translate very well in a still photo.

The video is embedded below, and the fun begins just after the 1-minute mark.