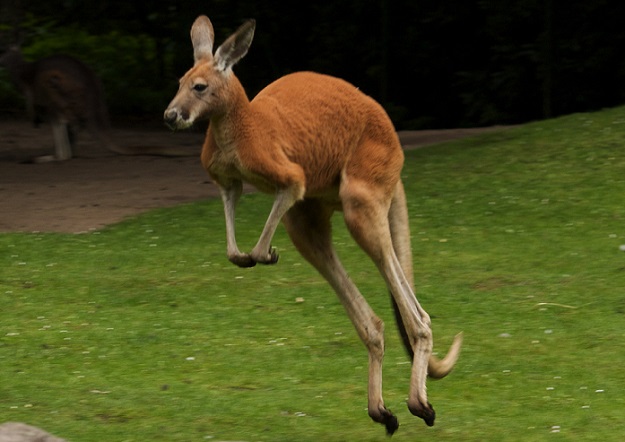 Kangaroos are quirky, charming, and endlessly fascinating creatures. Though endemic to Australia, YouTube has provided animal lovers across the world with incredible videos of kangaroos doing wild, crazy, and interesting things. Kangaroos certainly look cute, and they undoubtedly seem lovable, but make no mistake about it: kangaroos can throw down with the best of them.

If you ever arouse the ire of a kangaroo, it’s probably wise to make a break for it as quickly as you can, something a pair of golfers recently learned the hard way when a kangaroo on golf course starting chasing them.

Now believe it or not, kangaroos are actually quite fast and can easily outrun (or perhaps outhop is more appropriate) a human. Over a short distance, a kangaroo can hop at a speed of 44 mph. Over a longer distance, say about a mile, kangaroos can maintain a consistent speed of 25 mph. By way of comparison, Olympic 100 meter gold medal winner Usain Bolt, in top form, can reach a maximum speed just shy of 28 mph.

All that to say this: if a kangaroo has you on its radar, you better hope you have a bike or golf cart handy.

As for the backstory to the video, Gawker writes:

Two Brisbane, Australia blokes who review golf courses on YouTube, James Macklin and Connor Reeves, just wanted to have their shot at Queensland’s Hervey Bay Golf Club, but this kangaroo wasn’t having it, mate.

According to Macklin, he went to hit his ball and the roo started chasing him on foot. He decided to let Connor have a turn, and got out his phone just in case the kangaroo came at them again. Obviously, it did.

Now we’re not sure what’s worse, a lone kangaroo on the chase or a field full of kangaroos doing nothing except staring at you creepily.