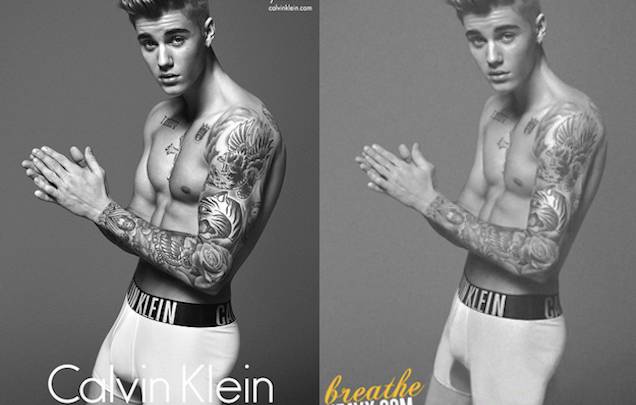 Reporting on tech news often requires us to pay attention to everything happening out there, especially during the busy CES 2015 season, whether it’s about new hardware or software, no matter how small or insignificant. For example, Adobe’s Photoshop and many other similar products are used to alter images all the time, making it an interesting tech topic. And BreatheHeavy.com managed to make it even more interesting by scoring some retouched images from Justin Bieber’s Calvin Klein shoot.

Taking tech things very seriously, we at BGR tried to think of a way to cover this particular story from the tech angle, but got way too distracted making up headlines for it. So instead of explaining why and how this happened, we’re just going to leave you with the headlines we imagined, in chronological order, inside Slack. An animation of the image above also follows after the break.

Chris: “Justin Bieber might be a lot less gifted than you thought”

Jacob: “The only thing larger than Justin Bieber’s ego…”

Brad: “Justin Bieber isn’t the total package after all”

Chris: “How to cure your girlfriend’s Justin Bieber crush once and for all”

Jacob: “Autotune isn’t the only reason Bieber’s voice is so high”

We had to stop at some point to focus on all the other more serious tech news you expect, no matter how impressive such photoshopping skills are.

For all the Bieber fans, haters and undecided, an animation showing the big change is also available below.