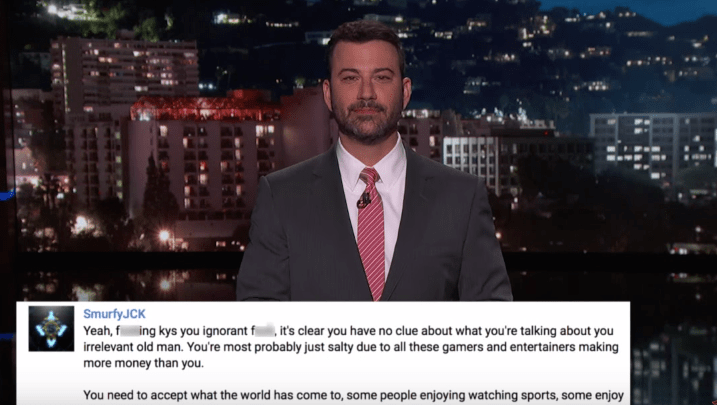 Did Jimmy Kimmel know what he was getting into when he made fun of gamers who spend hours watching other people play games on Twitch and YouTube? He probably did because the angry reaction he got from overly emotional YouTube gamers after he bashed their favorite hobby is pure comedy gold.

FROM EARLIER: All-day breakfast coming to 14,000+ McDonald’s starting next month

As someone who has watched Let’s Play videos and Twitch streams in the past, I’ll be the first to admit how objectively ridiculous the entire exercise is. My wife has shaken her head when she’s seen me checking out videos from Angry Joe, TotalBiscuit, Jesse Cox and other YouTube personalities. When she accuses me of being a dork, I nod my head and basically admit to being guilty as charged.

It seems, however, that others who spend time watching gaming online don’t have senses of humor about themselves because they’ve been angrily bombing Kimmel’s YouTube page with rage-filled comments about how much of a loser he is compared to the super-cool YouTube gamer dudes.

“Go f—ing kill yourself you ignorant f—, it’s clear you have no clue about what you’re talking about you irrelevant old man,” wrote one.

“Get your balls tie them with thick fishing line and jump off a cliff while your cats in a blender and the blender is being used to brush your teeth,” wrote another particularly imaginative troll.

Another one simply responded to Kimmel’s taunts by informing him that he’s “a f—ing egg.”

Check out Kimmel’s entire response video below — it already has more than 15,000 dislikes on YouTube!