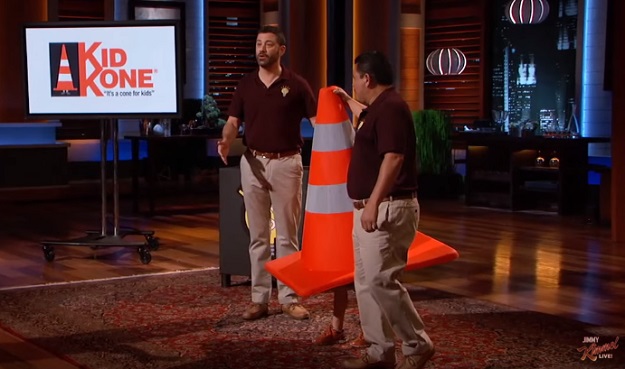 On last night’s episode of Jimmy Kimmel Live!, we were treated to a solid sketch featuring Jimmy Kimmel showing up on the set of Shark Tank to pitch a few outlandish ideas. Now because both shows air on ABC, Kimmel didn’t have to use stand-ins a’la Saturday Night Live. On the contrary, he actually got to present his preposterous ideas to the show’s real stars (or sharks, as they like to be called), including Mark Cuban.

In somewhat dense 6-minute segment, we see Kimmel, appropriately of Kimmel Laboratories, spoof many of the more ridiculous items one can sometimes see on Shark Tank. The first idea Kimmel presented was designed with child safety in mind, namely an oversized traffic cone kids can put on their heads to keep them safe when crossing the street.

Kimmel’s next idea was much better (read: funnier) and involved placing a lemon in a fish tank to save users precious time and the frustration associated with sprinkling lemon juice onto cooked pieces of fish. We won’t spoil Kimmel’s last idea as it’s probably the best of the bunch, but if you’re a fan of Shark Tank and all of the ridiculousness it often brings to the table, you’ll definitely want to check out the spoof in its entirety, available below.