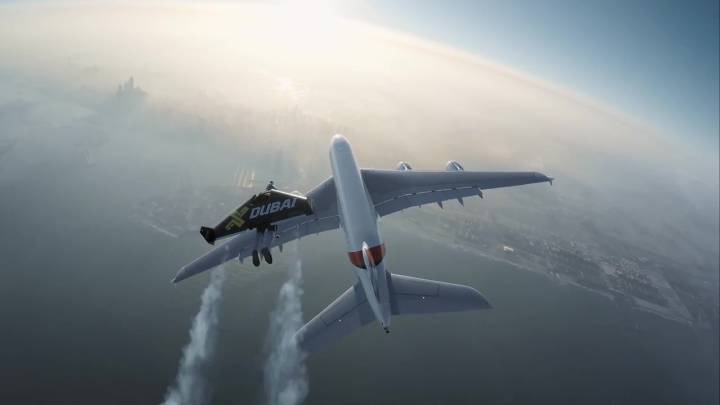 The following clip is a publicity stunt, but that doesn’t make it any less daring or incredible. Jetmen Dubai partnered up with Emirates Air to execute an incredible feat high in the skies: Flying jetpacks in tight formation with a passenger plane at impressive altitudes.

The show was “carefully choreographed” with Emirates, Jetmen Dubai says on its YouTube channel, so this kind of stunt didn’t just occur while an A380, the world’s largest passenger airplane, happened to be flying over the city. That would be even scarier, and would likely get the two stuntmen into some legal trouble.

“Over the last three months, Emirates and the Jetman Dubai teams worked closely to diligently plan and coordinate every detail of this project,” the video’s description reads.

The two daredevils who flew right next to the impressive airliner, changing positions more than once while up in the air, are no strangers to such feats. Yves Rossy and Vince Reffet performed jetpack tricks over Rio and Dubai as well, and they posted similar videos on YouTube.

The A380 flight stunt over Dubai’s Palm Jumeirah video is available below, followed by a second, longer trip posted on Emirates’ YouTube channel that explains what made it all possible.