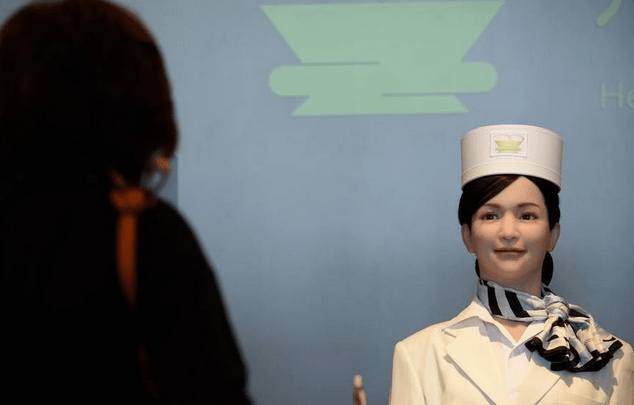 I have seen the future and it is awful. The Associated Press, via The New York Post, has published a dispatch from the Henn na Hotel in Japan, which has recently installed robots to handle every aspect of your stay, including handling your luggage and checking in and out of the hotel. Yes, that’s right: To check into your room, you’ll need to first chat with a creepy she-bot like the one pictured above.

This being Japan, of course, they can’t just have creepy humanoid robots — instead they’ve also got a dinosaur robot that’s been equipped with a receptionist hat and that greets you when you first enter. No, seriously.

The use of robots to staff the hotel is primarily driven by (what else?) the desire to save money, although it will be interesting to see how much guests will warm up to interacting with a dinosaur. The hotel also equips its rooms’ doors with facial recognition technology that can identify guests and that will only let them into their approved rooms. This brings added convenience since you’ll no longer have to carry key cards around during your stay.

The hotel will cost roughly USD$80 a night to stay in, which is remarkably cheap for a quality hotel in Japan. It’s scheduled to open to the public on July 17th.