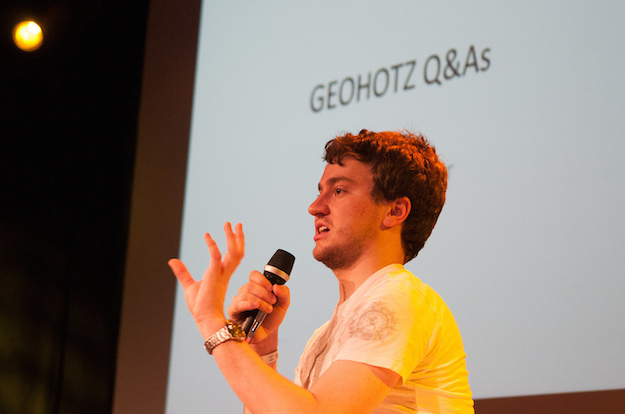 Not many hackers have names and reputations that last years beyond their most famous exploits. George Hotz, aka geohot, is an exception to this rule. Still only 26 years old, Hotz initially burst onto the scene in 2007 when, at the age of 17, he managed to jailbreak the original iPhone and get it to run on other carriers. At the time, back when the iPhone was an AT&T exclusive, this was big and exciting news.

A few years later, Hotz made headlines yet again when he reversed engineered the PS3, subsequently prompting Sony to sue him before the two parties ultimately reached a settlement agreement.

In the years following those headline-making exploits, Hotz has worn any number of hats, from being a student Carnegie Mellon to working stints at Google, Facebook and even SpaceX.

But these days, Hotz’s attention is laser focused on autonomous driving. Only thing is, Hotz isn’t content to sit around and wait for what Tesla or other manufacturers may release in the months and years ahead. Instead, Hotz has taken it upon himself to build a self-driving car. By himself. In his garage.

In an absolutely fascinating article, Ashlee Vance of Bloomberg recently caught up with Hotz and managed to get a first-hand look at the grandiose driving project Hotz claims to have put together in just about a month’s time.

He says it’s a self-driving car that he had built in about a month. The claim seems absurd. But when I turn up that morning, in his garage there’s a white 2016 Acura ILX outfitted with a laser-based radar (lidar) system on the roof and a camera mounted near the rearview mirror. A tangle of electronics is attached to a wooden board where the glove compartment used to be, a joystick protrudes where you’d usually find a gearshift, and a 21.5-inch screen is attached to the center of the dash. “Tesla only has a 17-inch screen,” Hotz says.

The computer in the center console, which runs Linux, suggests that Hotz managed to hack his way into the Acura’s computer system. But more than just a show and tell, Vance was able to go on a joyride with Hotz to see just how autonomous his 2016 Acura really was.

The verdict? Well, believe it or not, Vance came away very impressed. In fact, Hotz’s DIY technology seemingly works incredibly well for a project that was supposedly put together in just a few weeks.

With Hotz still holding the wheel, the Acura’s lidar paints a pixelated image on the dash screen of everything around us, including the freeway walls and other cars. A blue line charts the path the car is taking, and a green line shows the path the self-driving software recommends. The two match up pretty well, which means the technology is working. After a couple miles, Hotz lets go of the wheel and pulls the trigger on the joystick, kicking the car into self-driving mode. He does this as we head into an S curve at 65 miles per hour. I say a silent prayer. Hotz shouts, “You got this, car! You got this!”

The car does, more or less, have it. It stays true around the first bend. Near the end of the second, the Acura suddenly veers near an SUV to the right; I think of my soon-to-be-fatherless children; the car corrects itself. Amazed, I ask Hotz what it felt like the first time he got the car to work.

“Dude,” he says, “the first time it worked was this morning.”

One of the more interesting claims Hotz makes is that his homebrew technology is already more advanced than what Mobileye has to offer. Mobileye, in case you’re unfamiliar, is the Israeli-based company whose technology Tesla uses in its own self-driving software. What’s more, Hotz explains that he and Tesla CEO Elon Musk, at one point, bet a multi-million dollar employment contract hinging on whether or not Hotz’s technology could outperform Mobileye’s. Also interesting is the plausible claim that Musk at one point emailed Hotz with a lucrative job offer to come work at Tesla, an offer Hotz refused.

As for the technology that makes Hotz’s car ‘think’ on its own, it all boils down to machine learning. In other words, Hotz’s algorithm is constantly evaluating and learning to mimic Hotz’s driving practices and tendencies. Looking ahead, Hotz is planning to start driving for Uber in an effort to rack up miles on his car and give his AI software significant road experience to learn from and improve upon. At that point, an estimated five months down the line, Hotz is planning to ‘ping’ Musk and presumably talk business.

Vance’s entire piece on Hotz is absolutely engrossing and well worth reading. Make sure to check it out via the source link below.