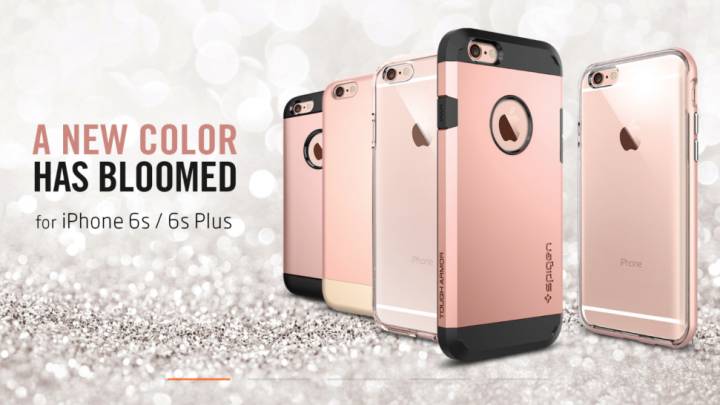 The iPhone 6s and iPhone 6s Plus haven’t been officially announced but many details about Apple’s upcoming smartphones have been leaked, including reports describing their purported design, specs, new features, release date, and pricing. An accessory maker that’s apparently anxious to sell you iPhone 6s cases is already marketing its upcoming products for Apple’s next iPhones.

Moreover, the company is already selling these new cases on Amazon – so check out this link if you’re willing to buy your iPhone 6s cases way before the device is actually launched.

What’s notable is that Spigen, with help of a mere promotional message and accompanying image, is ready to confirm the product names of Apple’s upcoming iPhones, and the fact they’ll be available in Rose Gold options.

Apple is expected to launch an “S” generation of iPhones this year, in line with its iPhone release pattern, so the product names aren’t necessarily a surprising revelation.

However, Spigen seems confident a Rose Gold iPhone is coming, which is a fancier version of pink that’s supposed to match the Rose Gold Apple Watch that’s actually made of gold. Many recent reports indicated that Rose Gold will be Apple’s fourth iPhone color this year, while others said Apple won’t make a rose gold iPhone 6s.

It’s not clear at this point what Spigen actually knows about this year’s new iPhones, but in a different slide on its website it says the cases have been “newly designed” for the iPhone 6s. The case maker might simply bet on the fact that the new iPhones are supposed to have the same overall design as the iPhone 6 generation, and use that as a reference design for new cases. However, rumors say the iPhone 6s will be slightly thicker than the predecessors, so old cases won’t necessarily fit the new phones.

Spigen’s iPhone 6s cases sell for prices starting at $9.99 on Amazon – check out this link.