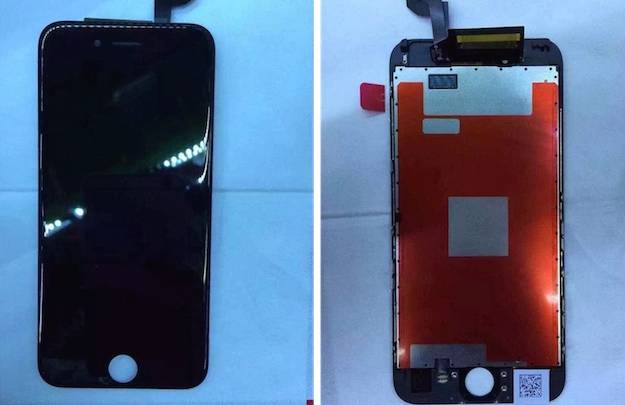 With September just around the corner, the number of iPhone 6s component leaks have started picking up. Just this past weekend, photos purporting to showcase iPhone 6s display components leaked online. Originally spotted by Nowhereelse, the components appear to be just slightly different from corresponding iPhone 6 components.  So while the photos in and of themselves don’t provide any insight regarding the Force Touch feature Apple is reportedly incorporating into the next-gen iPhone, previous reports have indicated that Apple’s supply partners have already started manufacturing Force Touch displays.

Even more interesting is a leak which purports to showcase an iPhone 6s prototype out in the wild. Originally published by M.I.C gadget, the photos were allegedly taken by “old” workers from Foxconn. As expected, the iPhone 6s design is aesthetically similar to the iPhone 6, hardly surprising given that Apple’s ‘s’ upgrades have historically maintained the same exact design as the previous model.

What is interesting, though, is that the iPhone 6s device obtained by M.I.C gadget appears to be just slightly thicker than the iPhone 6. While Apple has a penchant for making each successive iPhone thinner than its predecessor, the iPhone 6s prototype pictured here is reportedly 7.1 mm thick, just a tad thicker than the 6.9 mm iPhone 6. More than likely, the added thickness comes from sensors associated with the Force Touch display Apple will reportedly be bringing to the iPhone.

Over the past few months we’ve seen a few reports indicating that Apple plans to position Force Touch as a key selling point for the iPhone 6s and 6s Plus. While Apple has already included the feature on both the Apple Watch and the revamped MacBook, it remains to be seen what type of interface interactions Apple plans to associate with Force Touch on the iPhone. If it is, in fact, a highly touted iPhone feature, it stands to reason that Apple will have some cool tricks to show us come September.

As for other iPhone 6s features to look forward to, we can expect to see 2GB of RAM, a 12 megapixel camera, a speedy A9 processor, a more durable aluminum body, and an improved Touch ID Sensor.