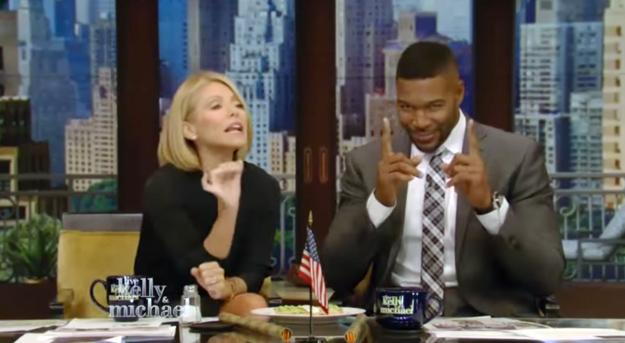 If you have a day job, the odds are pretty good that you don’t watch Live with Kelly and Michael on ABC every morning at 9:00 a.m. Normally, that might be a good thing. On Wednesday morning, however, Kelly Ripa and Michael Strahan actually got pretty hilarious while discussing Apple’s new iPhone 6 and iPhone 6 Plus.

DON’T MISS: This is what it was like to preorder the iPhone 6

“How big are we talking? How big is big?” Kelly asked Michael as the two discussed the brand new iPhone 6 and 6 Plus that had been unveiled by Apple less than a day earlier. “Show me with your fingers,” she then told the show’s producer.

But the producer’s attempt to illustrate exactly how large a 5.5-inch iPhone might be was apparently a bit… generous. “That doesn’t look like 5.5 inches,” Kelly astutely observed.

You can imagine where things were from there.

The segment got even funnier when someone finally presented Kelly with a tape measure extended to 5.5 inches, but we won’t spoil the rest. The entire iPhone 6 segment from Tuesday’s episode of Live with Kelly and Michael is embedded below.