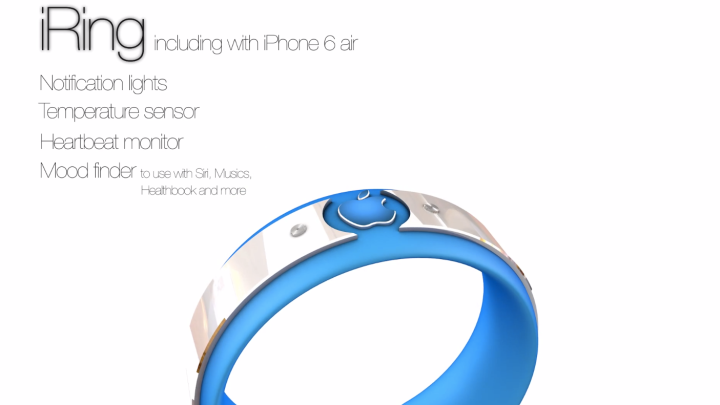 So far, the idea of an Apple-made ‘iRing” has existed only in the fevered imagination of Cantor Fitzgerald analyst Brian White, who breathlessly predicted last year Apple would release such a device as its remote control for the similarly mythical “iTV.” However, designer SCAVids has decided to give the iRing a tiny amount of life by incorporating it into a new iPhone 6 concept video that imagines using the wearable computer as a perfect complement for iOS 8’s upcoming fitness-related features.

Among other things, the imagined iRing will be able to measure your heart rate, take your temperature and even serve as a “mood detector,” which gives it a very 1970s vibe — if only the designer had figured out a way to make it function as a pet rock as well! Other than the iRing, the concept lets us see how the iPhone 6 might look in iPhone 5c-style colors including orange and purple, which were also both staple colors of 1970s fashion.

From a design perspective, the imagined iPhone 6 features the same rounded edges that we’ve seen in leaked iPhone 6 mockups but it also has a 5-inch display and not a 4.7-inch display and it also leaves the power button on the top of the device, whereas the actual iPhone 6 will move the button over to the side.

You can watch the full video below.