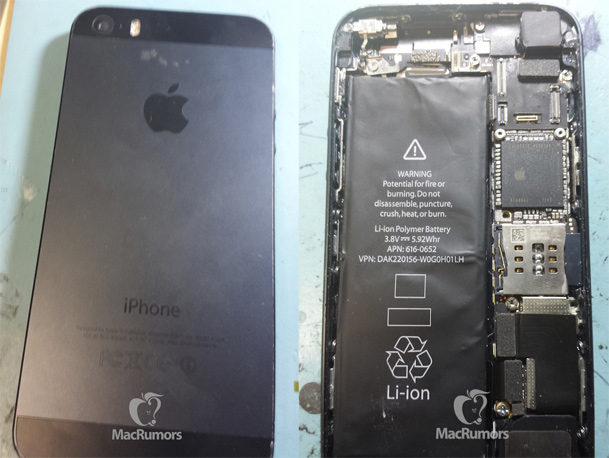 Photos of Apple’s next-generation iPhone 5S were published late Thursday evening and they show the inside of an assembled device as well as the assembled rear shell of the phone for the first time. MacRumors ran the images, and the site has published authentic photos of unreleased Apple products in the past. While much of what we see in the images has already leaked in the past, there are a few new details that can be ascertained, and one of them is pretty important.

First off, the upcoming iPhone 5S will have a dual-LED flash according to the leaked images. While the new iPhone may capture better low-light images as a result, the more important news is that Apple’s iPhone 5S will apparently include a larger 5.92 watt-hour battery as opposed to the smaller 5.45 watt-hour pack in the current iPhone.

Oh, and it’s definitely going to be available in black.

Beyond that, we can see that this iPhone includes the same logic board that leaked previously. This time, however, an unknown processor is seated in the board. Other parts are not visible, though we already know from a recent exclusive report from BGR that many components have been overhauled, possibly to help make room for new parts like a fingerprint scanner.