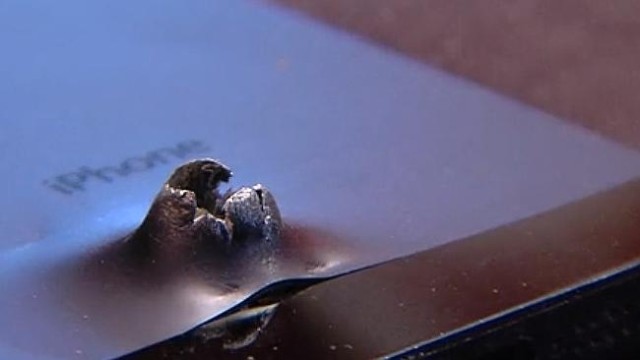 Staff sergeant Shaun Frank survived a brutal suicide bombing from just feet away while on tour in Afghanistan, and he has his iPhone 5 to thank. KSL on Tuesday reported on the story of staff sgt. Frank, who stood face to face with a teenage suicide bomber while helping another group of soldiers right a vehicle that had rolled. Frank tried to fire on the young Afghan boy before he was able to detonate the homemade bomb he was carrying, but he wasn’t fast enough — the device exploded and sent shrapnel and ball bearings flying in every direction.

Frank suffered multiple wounds from the blast as ball bearings and other metal scraps tore through his hands, arms and legs. Some of the largest pieces of shrapnel were blocked by an iPhone in Frank’s pocket, however, and according to his sister, Frank likely wouldn’t still be here if not for his iPhone.

“They did tell him when he got back to base that, that iPhone probably saved his life,” Frank’s sister, Alisha Lantz, told KSL during an interview.

Frank and his family saw resistance at first when they asked Apple to let them keep the phone as a memento when getting a replacement, but after several months — and after Frank’s story got around — Apple agreed to give the soldier a new iPhone and let him keep the damaged device.

“It’s the same phone he had previously minus a hole or two,” Frank’s sister joked.

Two video reports are embedded below.