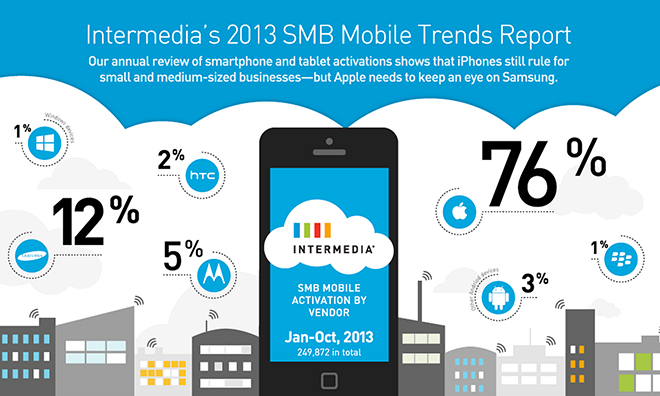 An email management company revealed that 3 out of every 4 mobile devices activated by the small and medium business it tracks were iPhones or iPads, AppleInsider reports. In its 2013 edition of its mobile trends report, Intermedia said that 190,000 iOS devices were activated from January to October, or 76% of the total of almost a quarter million activations it counted. Samsung came in second place with 12% of total activations, which amounted to nearly 30,000 mobile devices, while Motorola took third place with 13,800 mobile device activations. Both Microsoft and BlackBerry activations were unimpressive, getting a cumulative 2% share.

The company also found the iPhone 5s to be the more popular choice for small and medium business execs, with the device registering 6,906 activations. The iPhone 5c only accounted for 1,521 activations and was surpassed by iPhone 5, iPhone 4S and iPhone 4 purchases. However, Apple launched the new iPhone 5s and iPhone 5c in late September.

Intermedia gathered its results anonymously from its pool of almost 700,000 business users through its ActiveSync activation program. While the numbers may not be that relevant for the overall mobile business where Android is the dominant operating system by market share, they still reveal a clear preference for iOS devices for small and medium businesses. The iPhone and iPad have been doing rather well in the bigger enterprise ecosystem too, according to many reports, partly thanks to the bring-your-own-device (BYOD) policy adopted by companies – however, some people say that choosing the iPhone may not be best for certain businesses.