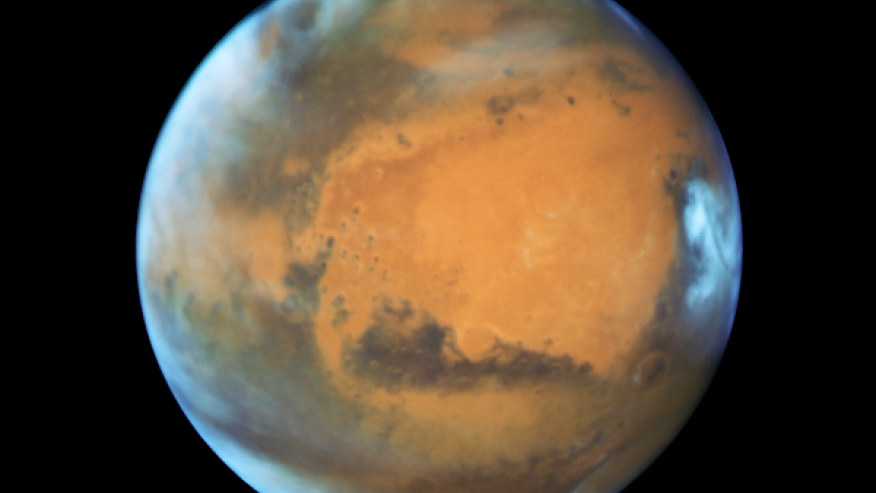 A new image taken by the Hubble space telescope shows Mars in incredible detail as astronomers prepare for a close-up with the red planet.

Operated by NASA and the European Space Agency, Hubble took the Mars image on May 12. “During May 2016 the Earth and Mars get closer to each other than at any time in the last ten years,” explained the ESA, in a statement.

On Sunday, Mars will “come into opposition,” which refers to the point at which the planet is located directly opposite the Sun in the sky. “This means that the Sun, Earth and Mars line up, with Earth sitting in between the Sun and the Red Planet,” explained the ESA.

Related: The best of Hubble in pictures

The event also heralds the planet’s closest approach to Earth, with Mars appearing bigger and brighter in the sky than usual, according to the space agency. “This event allows astronomers using telescopes in space and on the ground to see more details on the Martian surface,” it explained. “For observers using ground-based instruments the opposing planet is visible throughout the night and is also fully illuminated, making it a great opportunity for detailed studies.”

For example, the large, dark region on the far right of Mars’ surface is Syrtis Major Planitia, one of the planet’s first features identified by astronomers in the seventeenth century.

The Hubble space telescope, which was launched by NASA in 1990, celebrated its 25th anniversary last year. The telescope recently helped astronomers find one of the largest-ever black holes in giant galaxy NGC 4889, some 300 million light years away.

In February NASA unveiled plans for a powerful new telescope with a view more than 100 times wider than Hubble.

The Wide Field Infrared Survey Telescope (WFIRST) is designed to help researchers unravel the secrets of dark energy and dark matter, and explore the evolution of the universe, according to NASA.