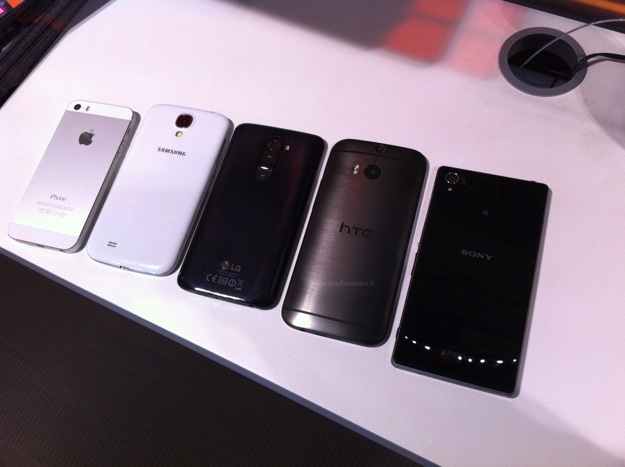 With less than a week to go until HTC finally announces its brand new flagship HTC One smartphone, it seems like there is absolutely no mystery left. We have seen photos of the sleek new phone leak at least a dozen times. We’ve seen videos of the phone as well. We recently saw a walkthrough of the One’s new Sense 6 software and we also know just about everything there is to know in terms of specs. Now, on top of everything else, we can see how the new HTC One stacks up against its toughest competition from Samsung, Apple and more.

Nowhereelse.fr on Wednesday posted photos of the new HTC One dummy we have seen before next to several top smartphones from competing vendors. For a reminder, this is not an actual phone but rather a mockup with the exact same look and dimensions that is used in display cases at cell phone retailers in order to prevent thefts.

Among the devices we can see the HTC One lined up with are Samsung’s Galaxy S4, Sony’s Xperia Z2, Apple’s iPhone 5s, the Galaxy Note and the LG G2.

Another recent leak suggested that the new One’s rear cameras will still be 4 megapixels like the current one, but they will support 3D shooting and effects.

A few photos from Nowhereelse.fr follow below and the rest can be seen by following the link down in our source section.