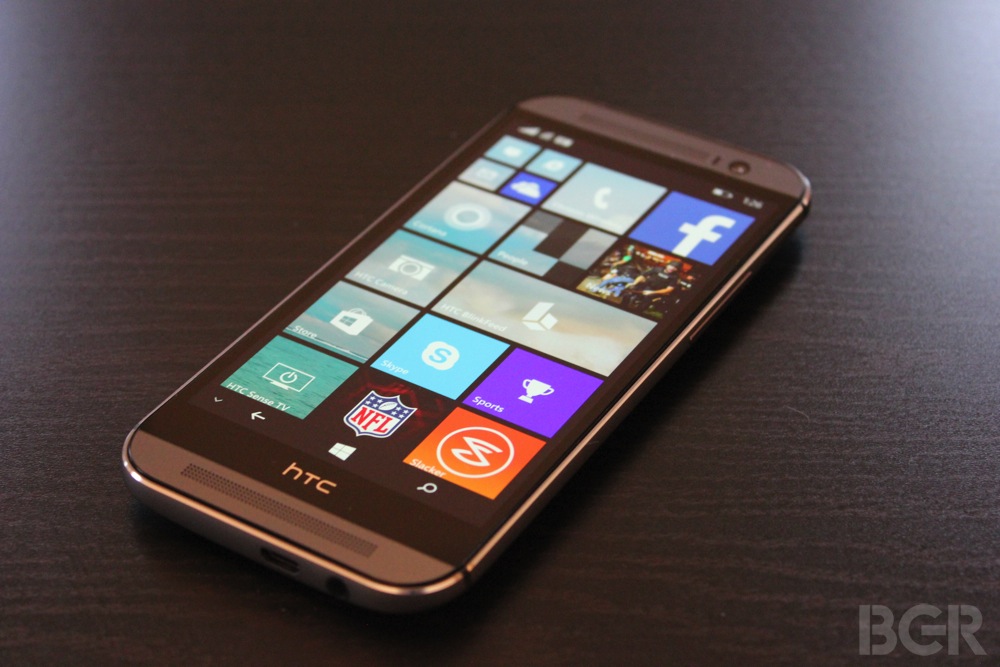 When HTC launched the One (M8) earlier this year, we called it the best Android phone the world has ever seen. With a few substantial hardware upgrades and some smart software additions from the (M7), HTC had built one of the best smartphones on the market. Microsoft saw the praise the device was receiving from press and consumers and hatched an idea: What if the best Android phone became the best Windows Phone?

The HTC One (M8) for Windows is the device the Windows Phone market so desperately needed. It isn’t quite on par with the latest Android releases, but the hardware is still impressive, even months after the initial launch of the phone.

The specifications are the same as before, so we’ll be quick about it. HTC’s One (M8) for Windows features a 5-inch full HD display, 2.3GHz quad-core Snapdragon 801 processor, 32GB of internal storage, 2GB of RAM, HTC UltraPixel rear camera, 5-megapixel front-facing camera and BoomSound stereo speakers. If you’d like to know how these specifications translate to the actual experience of using the phone, be sure to read our original review.

Much of HTC’s software from the custom Sense 6 update has also made the transition over to Windows Phone. The BlinkFeed app looks identical on the Windows device, creating a custom news feed which pulls in stories from a list of your preferred sources. Wrapped in the Windows Phone UI, BlinkFeed fits naturally in the center of the screen, scrolling through the latest news.

Sense TV has also returned on the new One (M8), providing full listings for your network provider and a universal remote which you can pair with your TV, your cable box and your home entertainment system.

The One (M8) for Windows also ships with Windows Phone 8.1, bringing all the added benefits of the latest system software to the phone. Of course, the stand-out feature of the 8.1 update is Cortana. Cortana is a news feed, a music ID service, a weather app and a voice-activated virtual assistant. It might not be as robust as Google Now, but in its first stages of release, it has a lot to offer.

There’s plenty more Microsoft-branded software on the phone as well, including Skype, Microsoft Office and an Xbox Games app which syncs with your Xbox Live profile. All of the prototypical Windows Phone apps have been preinstalled as well: News, Sports, Weather, Finance — everything you’d expect from a modern smartphone.

This is just a personal preference, but the Windows Phone UI feels even better suited to the One (M8) than Android. With adjustable tiles and a clever background display that intelligently adjusts to the app grid, none of the screen’s real estate is wasted. It might be the minor updates to the interface in 8.1, but Windows Phone really shines on the One (M8).

Windows Phone has a long way to go. As shipments continue to decline and sales fail to pick up, Microsoft is looking for a lifeline. It’s too early to say whether or not the HTC One (M8) for Windows will be that lifeline, but it’s an incredible showcase for the platform and a phone any Windows Phone user should consider picking up. The Windows Phone OS has never looked better than on HTC’s stellar device.

HTC HTC One M8 for Windows