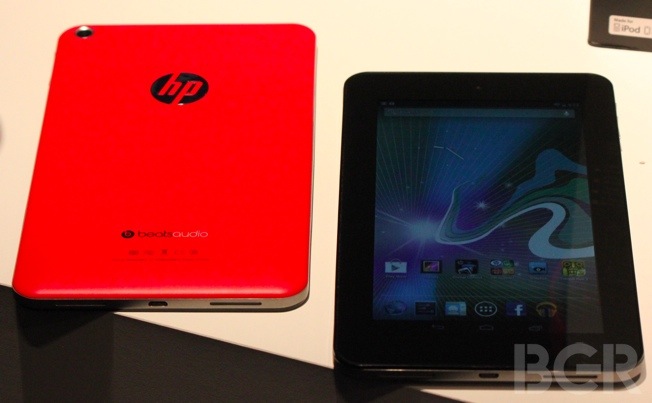 My first reaction when I learned HP (HPQ) was going to build an Android tablet was, “Dear God, why?” But after playing around with the tablet a bit and seeing its super-low price point, I’ve concluded that HP’s new Slate 7 is actually a pretty solid effort for the company’s foray back into the tablet world. Let’s start with the price because it’s the most obviously appealing part of the tablet at a rock-bottom $169. What makes this clever on HP’s part is that it can offer the cheap tablet as almost a throw-in to its PC customers who would be interested in owning it as a complement their new computers. So not only is HP undercutting the Kindle Fire and the Nexus 7 price-wise, but it’s also creating an opportunity to package its tablet to its existing customers as a nice add-on.

So OK, we know the price is nice but what about the tablet itself? While the Slate doesn’t measure up well against the best Android tablets or the iPad mini, it does show some promise for a first-time entry into the market. I found that the Slate 7 had a solid build and that its compact size that felt snug in your hands. Unlike Sony (SNE), HP seems to understand that making a tablet enjoyable to hold goes beyond simply making it feel light — having rounded edges and a soft-touch texture on the back panel make it vastly better from a practical standpoint than Sony’s boxy and awkward Xperia Tablet Z.

On the downside, the Slate 7’s display is not at all good compared to the Kindle Fire and the Nexus 7, with a resolution of just 1,024 x 600 pixels that really does look dull compared to what we’ve come to expect from smaller tablets. Additionally, the Slate 7 runs on a a dual-core 1.6GGHz ARM Cortex-A9 processor that is a demonstrably inferior piece of hardware than the quad-core Tegra 3 processor used by the Nexus 7.

All the same, I wasn’t expecting to be blown away by HP’s first attempt at making a tablet since its ill-fated TouchPad project imploded, so I consider the Slate 7 a solid first attempt by HP to dip its toes into the cheap Android tablet market. Whether the company is at all successful in selling budget Android tablets depends on whether it uses this foundation to build something better in the future.