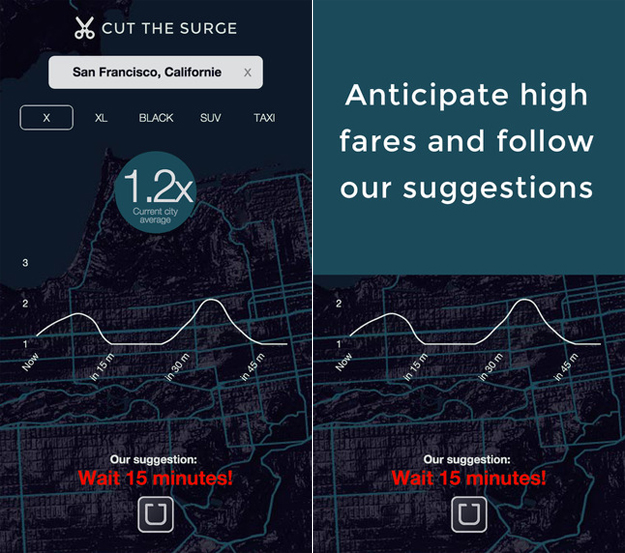 Uber is a true game-changer that reimagines the way we travel on a daily basis. The service truly could not be any easier to use, and millions of people around the world rely on it each and every day. Of course, Uber is far from perfect, and one of the bigger complaints users have pertains to surge pricing.

Well, there’s a free app that will help ensure you never have to pay surge prices again.

For those unfamiliar with Uber’s surge pricing policy, it’s an automatic mechanism that charges customers in certain areas more money during high-traffic times when cars are busier than normal. It’s aggravating, but understandable.

With an app called Cut the Surge, however, you can ensure that you avoid Uber’s hiked rates by booking your ride when fares are normal.

Cut the Surge is able to predict Uber rates for the next hour. If you try to book a ride but see the surge pricing warning, the app will tell you when you can expect to hail a car without paying an inflated rate.

The app launched this past April for $2.99, but its price dropped to free earlier this month following an update. The full description follows below, along with a download link.

Foresee Uber’s price surge in your city, ride at the right time and save money.

You will be able to predict the rate of the next 60 minutes to decide which Uber’s service choose, and what time order your driver.

Cut the Surge is available is all the cities where Uber is present.