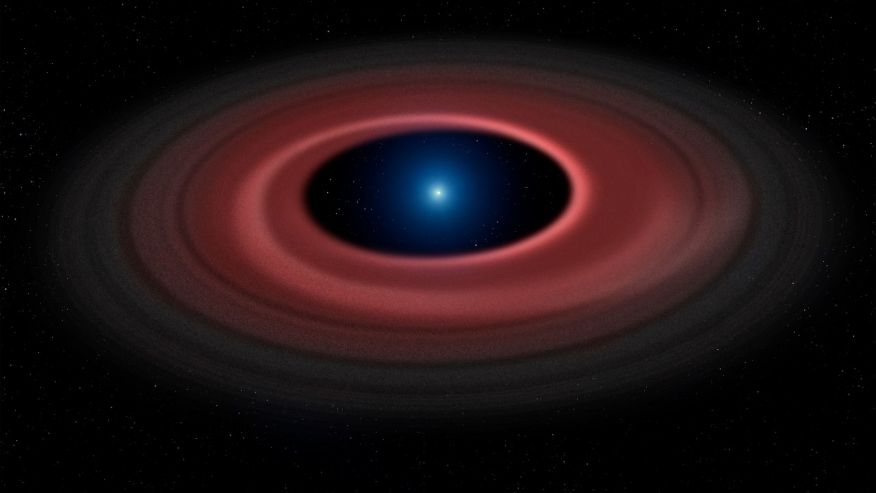 For the first time, scientists have captured an image of a glowing debris ring that formed as a result of an asteroid being ripped apart by a dead star.

Captured by scientists at the University of Warwick in the U.K., the rings are comprised of dust particles and debris as a result of the star’s gravity tearing apart asteroids that came too close. Gas produced by collisions among the debris within the ring is illuminated by ultraviolet rays from the star, causing it to emit a dark, red glow.

“We knew about these debris disks around white dwarfs for over 20 years, but have only now been able to obtain the first image of one of these disks,” said Christopher Manser, of the University of Warwick’s Astrophysics Group who led the research, said in a statement.

While looking a lot like Saturn’s rings, the scale of the white dwarf known as SDSS1228+1040 and its debris is many times greater in size.

Related: Asteroid 1,800 feet across to whip past Earth on Monday, approaching within 745,000 miles

While large stars — those more massive than around 10 times the mass of the Sun — suffer a spectacularly violent climax as a supernova explosion at the ends of their lives, smaller stars are spared such a dramatic end. When stars like the Sun come to the ends of their lives they exhaust their fuel, expand as red giants and later expel their outer layers into space.

The hot and very dense core of the former star — a white dwarf — is all that remains.

Researchers said studying such systems can help us get a sense of what our own solar system will look like once the Sun runs out of fuel.

“Over the past decade, we have learned that remnants of planetary systems around white dwarfs are ubiquitous, and over 30 debris disks have been found by now,” Boris Gänsicke, also of the University of Warwick’s Astrophysics Group, said in a statement. “While most of them are in a stable state, just like Saturn’s rings, a handful are seen to change, and it is those systems that can tell us something about how these rings are formed.”