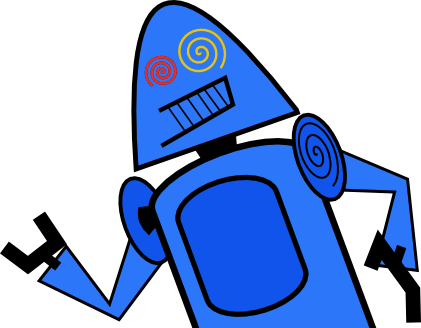 It’s a good thing that companies don’t normally let software engineers produce marketing materials. Exhibit A is Android engineer Dan Morrill, who posted pictures on his Google+ page this week showing his original stand-in concept art for Google’s (GOOG) Android logo that he prepared for a presentation. In short, Morrill’s sketches are terrifying. Instead of the cute little green “bug man” Android logo that we’ve all come to love over the past few years, Morrill depicted a menacing, crazy-eyed deathbot that looks as though it was found drawn on the walls of a remote Siberian Soviet-era insane asylum. It’s hard to pinpoint the most disturbing aspect of Morrill’s doodle: The robot’s multicolored spiral eyes, its ladder mouth or the way its pincers look poised to rip out your internal organs. At any rate, it’s a good thing that Google wisely decided to not adopt Morrill’s design, because the last thing someone wants is a mobile operating system that looks capable of killing you in your sleep.