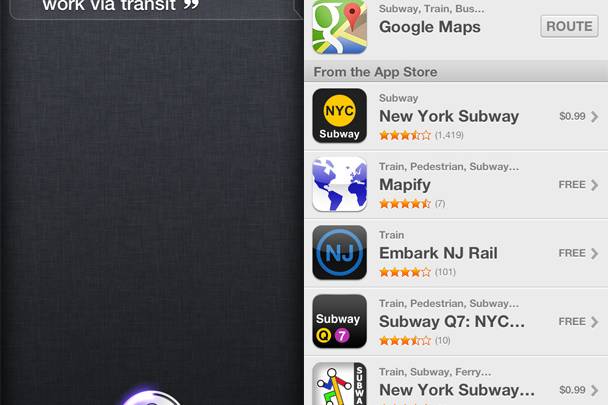 Millions of iPhone users rejoiced last week as the highly anticipated Google Maps app launched for iOS and put an end to users’ reliance on Apple’s (AAPL) awful Maps app. Who knows how many lives may have been saved? iPhone users aren’t completely out of the woods though, as Apple’s Maps app is still the default application used for mapping integration inside other third-party apps, and it’s also used by Siri when asking for directions. Using a simple trick that requires no jailbreak or hacking of any kind, however, users can easily bypass ties between Siri and Apple’s Maps app to get directions using Google Maps.

As noted by Cult of Mac on Saturday, adding “via transit” to the end of your sentence when asking Siri for directions jumps past Apple’s own mapping app and brings users to a screen that allows them to select Google Maps for directions. Google’s (GOOG) Google Maps app with then open with the destination already populated, and users will be given the option to get directions or navigate to the desired destination on foot, via public transit or in a car.