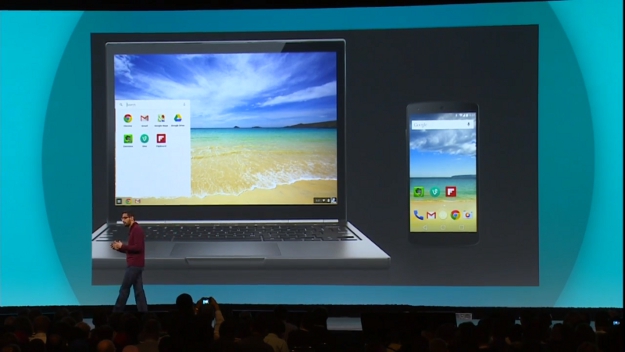 Google is giving the Chromebook line a major boost with enhanced Android integration. Stealing the spotlight on Amazon, all 10 of the top 10 highest rated laptops are Chromebooks. The popularity of the device has been growing rapidly, and now Google has some significant updates in store for Chrome OS.

Bringing Android and the Chromebook closer together than ever before, you will be able to use your phone to automatically unlock and sign in to your Chromebook. Notifications will also be mirrored between your devices, a feature that Mac owners should be very familiar with.

The next major step for Google will be to bring Android apps to the Chromebook. Sundar Pichai says the company is still in the early days, but in the preview, popular apps such as Evernote, Vine and Flipboard were all demoed on the Chromebook screen at Google I/O. During the Vine demo, the Android device display appeared vertically on the laptop screen, taking advantage of the Chromebook’s camera while connected.

It sounds like the amount of apps available on Chromebook might be relatively limited, but considering the platform’s history of purposefully limited functionality, this wouldn’t come as much of a surprise.