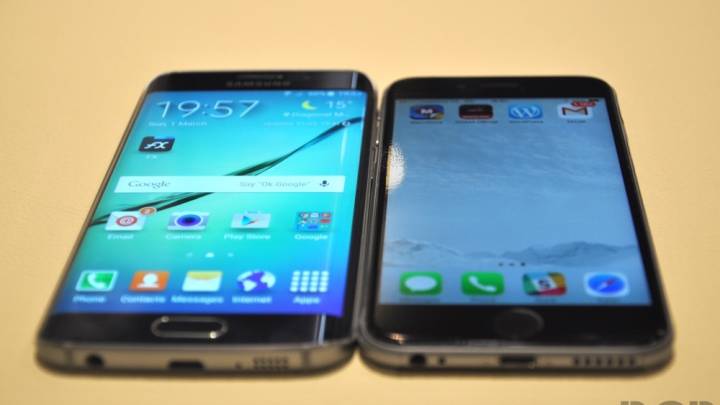 With the Galaxy S6, it appears that Samsung has finally started to incorporate long-held iPhone features that Samsung used to just love to make fun of Apple for. Now we’re not talking about the striking aesthetic similarities between the S6 and the iPhone 6, nor are we talking about how the Galaxy S6 fingerprint set-up process looks eerily familiar to Apple’s.

No, today we’re talking about intrinsic design choices Samsung made with the S6 that essentially amount to it reversing course and conceding that the Apple’s design choices with the iPhone were the way to go all along.

For starters, the Galaxy S6 lacks a swappable battery. Which is kind of funny considering that it wasn’t all that long ago that Samsung ran an extensive ad campaign mocking the iPhone for its battery woes and lack of replaceable battery.

Remember this commercial from last summer?

Apparently the S5 was amazing because it came with a removable battery, in stark contrast to the iPhone which, according to the commercial, often forced users to constantly be on the hunt for outlets to plug in their phones.

But Samsung didn’t stop there. It also put up “Wall Huggers” print ads up at various airports around the world. Naturally, the ads took not-so-subtle jabs at Apple.

And now, lo and behold, the Galaxy S6 doesn’t come with a replaceable battery.

One of the key features of the Galaxy S5 was that the device was water and dust resistant. For many, this was heralded as the device’s flagship feature. This was accomplished via a somewhat inelegant USB flap cover which protected the device’s internals from pesky H20 and harmful debris.

Now to be fair, some testing showed that the device could sit in water for extended periods of time and still function, but if it was all that useful, why did Samsung do away with a feature they couldn’t stop bragging about just one year ago?

Likely answer? In designing the S6, Samsung, like Apple, put thinness and a svelte form factor at a premium. As a result, some utilitarian features had to be axed. Now don’t get me wrong, a water resistant smartphone is a great idea, especially when it works as advertised as the Galaxy S5 seemingly demonstrated. But if Samsung ultimately ditched the feature in the name of sexy thinness, well, that’s a direct page from Apple’s own playbook, for better or worse.

And speak of the devil, compromising previously touted features in the name of a sleek form factor brings me to a third example.

The Galaxy S6 marks the first time that a Samsung Galaxy S model doesn’t offer a removable storage option. Gone from the S6 is the tried and true, and to some, beloved microSD slot. MicroSD cards offered users who needed extra storage-in-a-pinch a range of options. Samsung itself, for instance, even sells a 128GB microSD card.

So why is the Galaxy S6 now removing a feature that long differentiated it from the iPhone?

Well, achieving a slim form factor undoubtedly had something to do with it. Additionally, it’s also possible that storage gains achieved with microSD cards were offset by discernible drops in overall phone performance.

Even amongst staunch Samsung users, there was no getting around the fact that the iPhone’s choice of materials were vastly superior to the plastic oriented designs Samsung opted for in previous Galaxy S models. With the Galaxy S6, Samsung has finally stepped up its game and ditched the cheap and flimsy plastic in favor of more refined and durable materials.

Indeed, many first impressions of the Galaxy S6 couldn’t help but harp on how Samsung finally decided to get out of the plastic game.

To wit, here’s Wired writing about the S6:

These are flagship smartphones through and through, and they look like it. The sleek, sturdy devices—made of Corning Gorilla Glass and aluminum—are beautiful objects. They come in colors like emerald green and blue topaz, and are just artfully made. I know dozens of iPhone users who refuse to give up their 5S because it just feels so indescribably good, and I get the exact same vibe using the S6.

The story behind Samsung’s 180

All of these features taken together, not to mention the Galaxy S6’s iPhone-esque fingerprint sensor, bodes well for Samsung users. While many of the early Galaxy smartphone models were uniquely focused on iPhone differentiation, what with their bigger screens and replaceable batteries, the Galaxy S6 acknowledges that many users care more about a sleek form factor than they do about features which have arguably outlived their usefulness. As a quick example, users who need long battery life are much better served by Mophie cases than they are with tinkering with replaceable batteries.

All in all, it’s great to see two tech giants competing and learning from each other. After all, it’s not as if the iPhone hasn’t copped a few features from its Android rivals in the past either. In the end, it’s the consumers who reap the benefits of the fierce iPhone vs. Android rivalry. The Galaxy S6 emphatically proves as much.