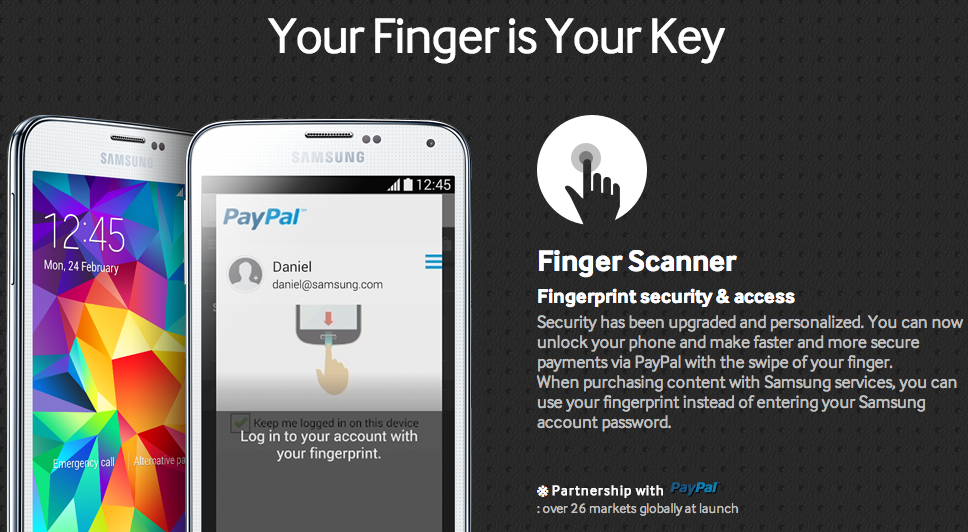 As the publication notes, the Galaxy S5’s fingerprint scanner will be the first on a smartphone that will be compatible with PayPal’s mobile payments app, which means you’ll be able to use your fingerprint to authorize payments in any website or store that accepts PayPal as a form of payment. Apple’s fingerprint scanner, in contrast, for now only works to buy music and apps from the Apple App Store. What’s more, Technology Review says that the Galaxy S5 might be the only game in town to offer fingerprint scanner compatibility with PayPal for a while because PayPal hasn’t yet committed itself to bringing the technology to other phones.

The technology used to make the Galaxy S5’s fingerprint scanner work with PayPal’s mobile app was developed by the FIDO Alliance, a consortium of tech companies that was founded in 2012 to reduce Internet services’ reliance on passwords. The alliance — which includes industry heavyweights Microsoft, Google, Lenovo and LG — has been developing password-killing technology for years and the Galaxy S5 will be its first major test to see whether fingerprint authentication is a legitimate alternative to the complex password.