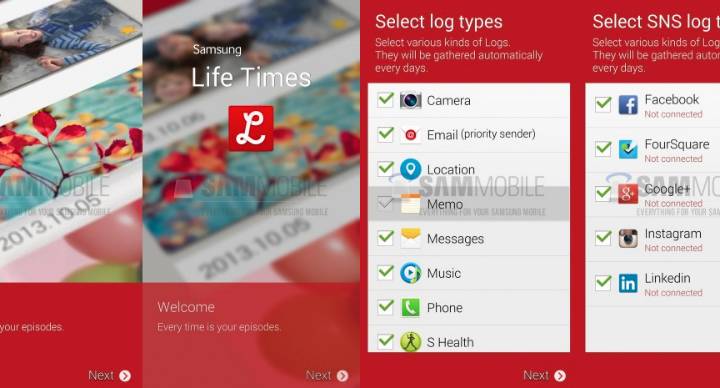 Samsung is expected to introduce new software features of its own on the Galaxy S5, as it did with previous Galaxy S generations, and information about one of the company’s new mobile apps has seemingly been leaked. Sam Mobile, which has shared many details about unreleased Samsung products in the past, has received screenshots for a Samsung Android application that will reportedly be able to log the user’s life, and which has been found on an SM-G900H device, believed to be part of the Galaxy S5 family of handsets.

Called Samsung Life Times, the app is “kind of a diary,” the publication writes, which is able to collect information from various apps and phone events and create a log that could be accessed in the future. According to the available screenshots, the user will be able to customize the logging experience by including or excluding certain information.

Life Times will be able to collect data from social networks including Facebook, Instagram, Google+, FourSquare, LinkedIn but also from phone apps including Camera, Email, Memo, Phone or Messages. Additionally, location information and even S Health details could also be logged.

The app’s welcome screen shows certain similarities with Samsung’s rumored new TouchWiz interface that will bring a Google Now and Metro-like UI to users. However, it’ll be interesting to see how much bloatware features Samsung will include in its upcoming Galaxy S5 version considering that Google is not too happy with how the South Korean giant has customized its Android experience recently.

While Sam Mobile has screenshots of the app, the application itself has not been leaked, and it’s not available for unofficial installation on existing Android devices.