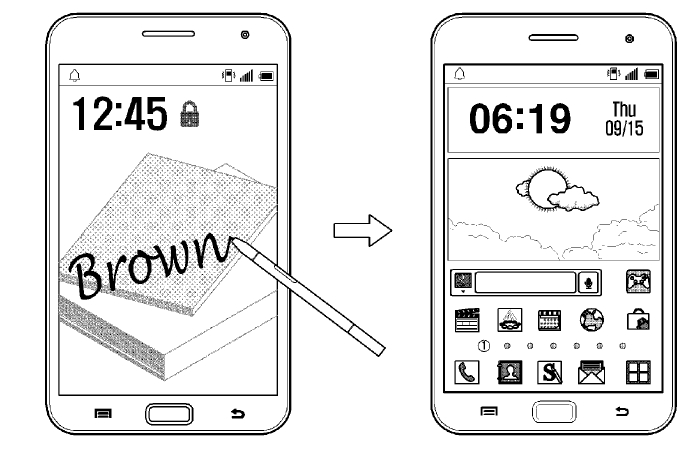 Samsung is apparently interested in further improving the security of mobile devices that come with stylus support, such as the future Galaxy Note 4 smartphone, as well as the speed of launching certain applications, a new patent application discovered by Phone Arena reveals. Entitled “Mobile Device, and method for releasing lock of the mobile device via handwriting recognition,” the patent describes methods of unlocking the screen of a mobile device by using a handwritten signature instead of a lock pattern or a PIN code.

Furthermore, by writing one of the supported commands on the screen, the user could launch certain apps directly from the lock screen, without having to unlock the display and then move through multiple screens to find the appropriate app. Samsung provides various examples of handwritten text commands that can be converted to applications including calling a contact, launching the default browser, the gallery or the maps application.

Before being able to use the S Pen’s handwriting recognition feature described in the patent, users would have to teach the device their signature, and input commands for the supported apps.

Interestingly, the patent suggests that the phone would also have some contextual awareness. By writing “call mom” on the lock screen, users would be able to initiate calls to their mothers. Google has recently introduced a new Search feature for Android devices that lets users assign family relationships to contacts.

The new software feature described in the patent could make its way to the Galaxy Note 4 and future stylus-enabled Galaxy smartphones and tablets, although it may very well remain just a concept for unlocking phones and initiating fast actions. In addition to stylus support, the patent says that using a finger to write commands on the screen would also be supported.

Samsung isn’t the only company working on new screen unlock features – the South Korean giant is also reportedly going to include fingerprint recognition in the upcoming Galaxy S5. LG has further improved its KnockON LG G2 feature, creating an advanced Knock Code feature for the G Pro 2 that will be able to recognize well over 86,000 different knock codes to unlock the phablet. Moreover, a new TimePIN Android app would change the PIN code of a mobile device every minute to enhance security.