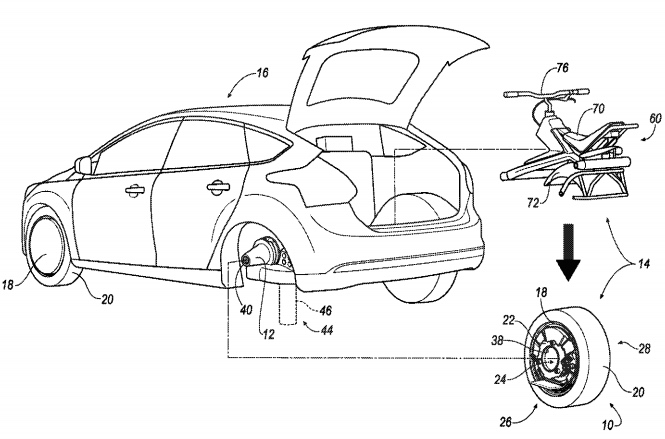 A recently filed patent from Ford shows that Tesla isn’t the only forward-thinking car company on the planet. While the concept car detailed in Ford’s patent may never see the light of day, it’s just crazy and cool enough to warrant covering.

The patent in question describes a futuristic car with a detachable rear wheel that can quickly transform into a electric unicycle. In other words, the patent essentially describes the ultimate in quick getaways for both villains and heroes alike. In fact, the entire contraption may remind some of this famous scene from the Batman film The Dark Knight.

According to the patent, titled Self-Propelled Unicycle Engagable with Vehicle, the concept would allow users to pull over and remove one of their vehicle’s rear tires via an automated jack system. Following that, users would simply remove a separate contraption that would contain a seat, sensors, a battery back, and handlebars for steering. Presumably, there would be an easy to use mechanism to attach the two separate items.

A more detailed illustration of the final contraption can be seen below.

Now you may be wondering: where is the motor? Well, the patent details a system wherein the motor would be housed within the wheel itself.

The patent was initially filed in June, and while we won’t be seeing any electric unicycles on the road anytime soon, it’s somewhat reassuring to know that companies like Ford, at the very least, are thinking well outside the box.

While it’s easy to dismiss such patents as being wholly unrealistic, we should point out that a company called Ryno Motors has already demonstrated a working version of the vehicle detailed in Ford’s patent. A video demonstration can be seen below.

A more recent video of the RYNO being tested was posted this past August.