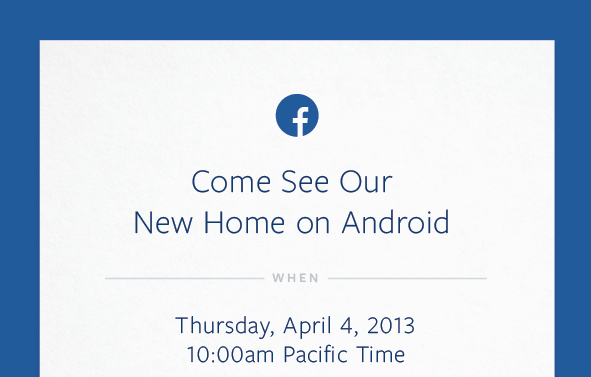 Facebook (FB) on Thursday sent out invitations for a press event that promised to show off the company’s “new home on Android,” which naturally led to fresh speculation about the company’s intention to produce its own Facebook-centric smartphone. Unnamed sources have told 9t5Google that Facebook plans to show off its own modified version of the Android operating system, a move that’s similar to the way Amazon (AMZN) has heavily modified Android for its own Kindle Fire HD tablets. 9to5Google’s sources also indicate that Facebook is working with HTC (2498) to produce a smartphone based on Facebook’s modified Android that will be sold “as a lifestyle brand, not specifically for its hardware or software.”

This won’t be the first time that Facebook and HTC have worked together to make a smartphone. In case you don’t remember, HTC tried something like this back in 2011 with the ill-fated HTC Status smartphone that had a dedicated Facebook button and that looked like a rejected BlackBerry (BBRY) design concept from around 2006. But 9to5Google’s sources indicate that the new phone will feature “a deeper, forked version of Android rather than a Facebook-ified version of Sense,” so it seems the two companies are putting more effort into creating a top-tier device this time.